Urban evolution: Creatures are evolving with our cities 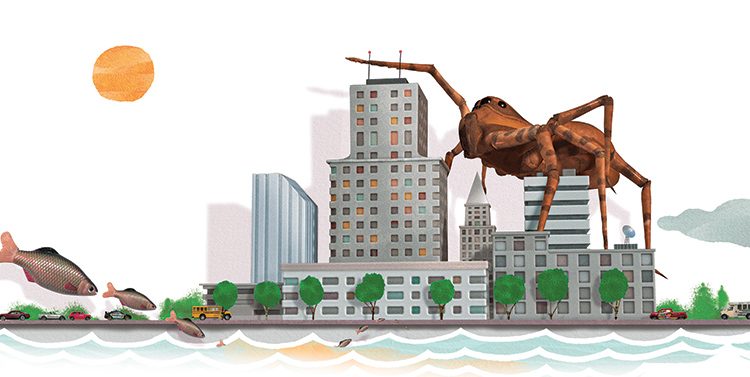 Spiders have been creeping into Marina Alberti’s thoughts lately. They have crawled out of our forests and fields and spun their webs in our cities, where they’re thriving, getting bigger and reproducing more.

Alberti, professor of urban design and planning, and her colleagues aren’t as much frightened by this as fascinated. Recognizing that urbanization continues to have a profound effect on nature, UW scientists, urban planners and students are taking note of the human activities that trigger evolutionary changes in creatures great and small—at rates faster than conventional science expected.

Alberti’s office on the top floor of Gould Hall looks toward Capitol Hill. Though the neighborhood is densely populated, Alberti is most interested in the trees, or in her parlance, the urban forest, that hide the thousands of houses.

Alberti is intrigued by the birds that inhabit the trees. She is curious about the creatures and microbes that thrive in the soil beneath them. And about the houses, apartments, office buildings and roads. How the rain runs down the roads. And how the people who live there behave.

As head of the UW’s Urban Ecology Research Lab, Alberti and her students explore the range of relationships among humans, their cities and the wildlife, waters and woods around them. Her team models land-cover change in the central Puget Sound area to inform regional and local decision-makers. The group studies population growth in the Snohomish Basin to inform long-term development in one of the fastest growing areas of the state. They survey urban trees and the backyard-management behaviors of homeowners.

Meanwhile, spiders, according to recent studies, benefit from an urban environment, which is often warmer and rich with insects to dine on. One recent Australian study found that a group of arachnids flourishes in areas with more paved surfaces and less vegetation. The spiders’ success in cities may be positive for the environment since the creatures curb burgeoning insect populations and provide food for birds.

That’s just one example of an organism affected by urbanization, says Alberti. In a recent article, she cites studies that show songbirds are growing bolder and have changed their tunes so they can be heard above the din of the city. Meanwhile, salmon in Puget Sound are getting smaller. And earthworms are becoming more tolerant of heavy metals. These shifts in animal traits come from our alteration of their habitats, changing of nutrient cycles and introduction of new species. Humans bring in non-native species, change specie composition, and create a mosaic of patches of biology that can help or harm the animals that live in and around urban areas.

“Then these organisms undergo evolutionary change,” says Alberti. “The changes are morphological [like the spider developing a larger exoskeleton], physiological [the spider’s increased fecundity] and also life history [the arachnids are active longer].”

Her interest in the complex relationship between nature and the urban environment has drawn Alberti to work with biologists, urban planners, plant scientists, hydrologists, computer scientists and others. “Marina is kind of like two people in one,” says John Marzluff, a UW wildlife scientist and expert in avian conservation who has worked with Alberti for several decades. “She has a great ecological and evolutionary knowledge as well as an understanding of the actual application to the built environment, planning and architecture.” Alberti, who trained in Italy, pursued a Ph.D. in urban and regional planning at MIT, completed a postdoctoral program in Stanford’s biology department, and landed at the UW in 1997. When Marzluff arrived a year later, he looked for colleagues with similar interests and lit upon Alberti. “We just started a conversation about how we could have some sort of joint research project to understand the animals and how they respond to the urban environment,” he says. The urban planner remembers the visit clearly. “He came in to my office and said, Marina are you interested in birds and cities? Let’s work together.”

The two then started the Urban Ecology Research Lab, about a decade ahead of its time. “At that point, urban ecology was not yet a big topic,” she says. “Now every ecology conference session is about it.”

One afternoon this spring, graduate student Karen Dyson was making notes on a project examining bird diversity among the commercial parks around Bellevue. Another student is exploring human well-being in near-shore environments. A third is focused on plant biodiversity around Puget Sound.

As research collaborators, Marzluff and Alberti explore how to study urban ecosystems, wonder if city ecosystems could be more resilient, and note how urbanization reduces the types of native birds while providing opportunity for new species. The crow, one of Marzluff’s specialties, is the classic example of a non-native animal that thrives and, in fact, co-evolves, with humans. “Birds are better than most animals at living with us,” says Marzluff, “probably the best.” Animals will evolve and adapt to humans more than people think, he says. “That’s really good news. But there are definitely ones that will go extinct.” Recognizing that, urban planners may be able to adjust the amount or arrangement of built space and green space to benefit or limit certain species.

Alberti’s newest book, “Cities That Think Like Planets,” is based on “the idea that we can build cities with an understanding of how human and natural systems have evolved over time,” she says. The University of Washington Press publishes the book in July.

“In an urban planet, there is no place that is not affected by the presence of humans,” says Alberti. But that doesn’t have to be bad. “Humans are not just the cause of problems, they can be the solutions.” The “smart city” is a current notion of a community that relies on technology to improve human life in urban settings. “But I see smart cities as relying on wise people, wise societies,” says Alberti. The science knowledge we are acquiring now can inform how we build and change our cities, she adds. “We can consciously use our cities to steer our planet into being more resilient.”

Humans already have this capacity, says Alberti. She cites examples over the centuries including the Tokugawa Shoguns, who curbed deforestation in the 17th century by changing building practices and turning to fuel-efficient stoves. Opportunities for innovation, the right approach to scientific findings and a new paradigm for building cities will lead us to cities that “bio-cooperate,” she says. Alberti sees a future with hybrid cities alive with animals, plants and people, nature-friendly buildings, and populations prepared to adapt to changing scenarios. “The news is that we now understand that humans can affect ecosystem function and evolution on a planetary and contemporary scale,” she says. “To become aware of this power is a good thing. Now we need to figure out how we can participate and build cities where humans are key players in nature’s game.”