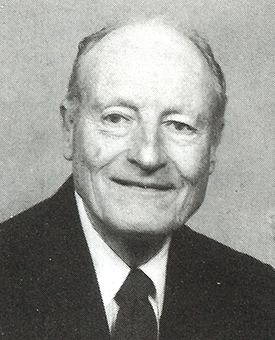 UW alumnus and retired UW lecturer Richard (Dick) Carbray, ’44, ’51, has followed in the footsteps of John F. Kennedy by writing his own version of Profiles of Courage in a new book titled Prophets of Human Solidarity.

He took 38 people from all walks of life who have made a difference in American society and wrote brief remembrances on each of them. “It’s not a biography but a profile, a vignette, if you will,” he explains. Many of the names are world famous, such as Daniel Berrigan, Paul Robeson, Oscar Romero and Studs Terkel. Several have UW connections—such as labor leader Harry Bridges, who was recently honored with an endowed chair in labor studies, or Henry Steele Commager, the American historian who first held the Bullitt Chair in history.

Some of Carbray’s most touching vignettes concern UW alumni or professors. In a chapter titled “Greater Love than This” he traces the brief life of Benjamin Lindner, a 1983 graduate of the College of Engineering who volunteered to help the peasants of Nicaragua. Carbray notes that Lindner, murdered by Contras in 1987, was “a caring, observant young man who anguished over the lives of the people, among whom he lived, whom he was trying to help by building a small hydroelectric dam. … The University’s motto, Lux Sit (Let there be light), was particularly appropriate for one of its finest and dedicated alumni, Ben Lindner.”

He also profiles Gordon Hirabayashi, a senior at the UW in 1941 who refused to obey “evacuation orders” removing Japanese Americans from the West Coast after Pearl Harbor. His brave action initiated a test case that went all the way to the Supreme Court (which ruled against Hirabayashi in 1943). “The history of Gordon Hirabayashi’s struggle is fascinating—part detective story, part civics lesson, and overarching everything, it is the story of a concerned citizen who never lost faith that justice would prevail for him,” Carbray writes.

There are other famous UW characters, such as Alice Franklin Bryant, ’19, an advocate for human rights, a critic of the Cold War, and an early opponent of the Vietnam War. Legendary History Professor Giovanni Costigan is also present, as Carbray goes into great detail on the famous Costigan-William F. Buckley debate of 1971.

Carbray also profiles Philosophy Professor Melvin Rader, a victim of the McCarthy-like Canwell hearings of 1948. “Those hearings probably hurt Mel Rader and his family the most with their wild and finally disproven charges against him, the hurt in terms of late anonymous phone calls, and of the time and money required to rebut these false accusations.” Prophets of Human Solidarity, Carbray’s first book, is published by Barbara Krohn and Assoc., and is available in Seattle and national bookstores.