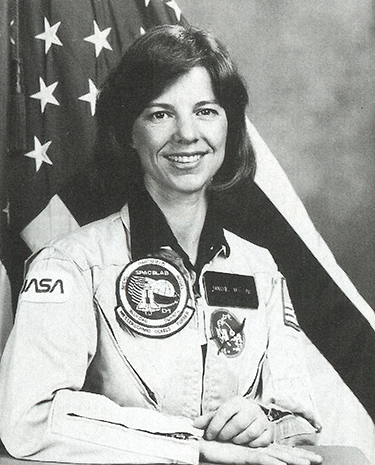 Astronaut Bonnie Dunbar, ’71, ’75, will be the guest speaker at the University of Washington’s 118th Commencement ceremonies to be held June 12 in Hec Edmundson Pavilion.

Dunbar, a native of Sunnyside, Wash., has flown three times in the space shuttle, racking up a total of 761 hours in space. Her latest mission took place on a 14-day flight last summer, where she served as payload commander for around-the-clock experiments in crystal growth, surface tension physics and human physiology.

In press interviews, Dunbar has said that she always wanted to be an astronaut. She got a head start toward that goal at the UW, where she studied under UW researchers who helped develop the ceramic tiles that protect the space shuttle upon reentry. Both her B.S. and her M.S. are in ceramic engineering. Dunbar also earned a Ph.D. in biomedical engineering from the University of Houston in 1983.

Dunbar is the fourth guest speaker to address UW graduating classes in several decades. Other commencement speakers have included Speaker of the House Tom Foley, ’51, ’57; Seattle Mayor Norm Rice, ’72, ’74; and former Governor and Senator Dan Evans, ’48, ’49. The use of an outside speaker departed from a long-standing tradition in which the University president served as commencement speaker. However, President Gerberding will still address the students with some brief remarks.

The Class of 1993 will be one of the larger graduating classes in recent years, says UW Registrar W.W. (Tim) Washburn. About 4,000 of approximately 8,520 students graduating will participate in two commencement ceremonies. Graduates in the College of Arts and Sciences will be honored at the morning, or “purple,” ceremony and all others will participate in the afternoon “gold” event.