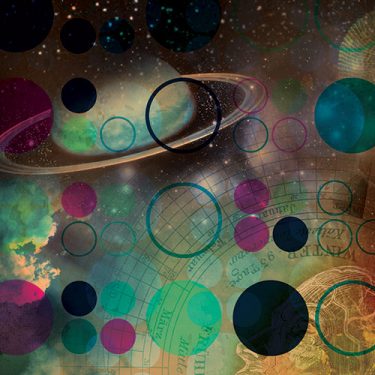 University of Washington astronomer Eric Agol played a key role in the discovery of 715 new exoplanets announced by NASA Feb. 26. Agol was on a team that found seven of those worlds, all in orbit around the same star, Kepler-90. It is the first planetary system with seven planets seen to transit, or cross in front, of their host star.

Agol and colleague Josh Carter of the Harvard-Smithsonian Center for Astrophysics, along with co-authors, discovered the grouping and helped confirm the high likelihood that it is a planetary system. An amateur astronomer assisted in identifying the seventh planet.

The worlds were all detected by the Kepler Space Telescope. Many of the newly verified systems have multiple planets. The 715 worlds orbit 305 different stars, and the great majority are planets smaller than Neptune. In the seven-planet system Kepler-90 there are two worlds about the size of Earth, three super-Earths—planets larger in mass than Earth but less than 10 times so—and two much larger planets.

Four of the 715 newly discovered worlds are less than two and a half times the size of Earth and their orbits are within their host star’s habitable zone, meaning the swath of space is just right for an orbiting planet’s surface water to be in liquid form. And that means it has the qualities that could support life. The NASA discovery increases the total number of confirmed exoplanets to 1,700.