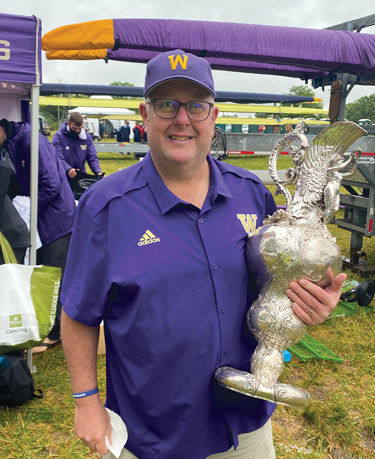 As a kid growing up in Kansas City, Jeff Bechthold wanted to be a sportswriter. But when he was in college, he discovered the profession of sports information, and off he went. For the past 31 years, Bechthold has worked in sports information for the UW athletic department. He handles Husky football and crew.

Did you grow up in a sports family?

My family always enjoyed sports, and I, at one point or another, participated in nearly all of the routine team sports. I grew up mostly in Kansas City and went to hundreds of Royals, Kings and Chiefs games, as well as the occasional KU basketball game. Kansas City isn’t much of a college town, so it was mostly pro sports for me growing up.

Did you play sports in high school and/or college?

I played everything at the youth level—baseball, basketball, football, soccer, tennis, golf, wrestling and more. But not at the high school or college level. I tried out for the high school golf team each year—it got me two free weeks of nine holes after school each day—but never made it.

Generally speaking, we have a head coach press conference on Mondays, for which I will have prepared a new set of game notes. On Tuesdays and Wednesdays, we have player and assistant coach interviews after practices, and then the head coach after Thursday’s practices. On Friday, we typically meet with the TV crew, and the game is Saturday. All during the week, we’re fielding credential requests for press, visiting team staff and media, professional scouts, etc., along with a thousand other small details.

During rowing season, it’s usually mostly about getting the schedules and lineups set. Home events and road events certainly offer different challenges, and Windermere Cup/Opening Day is an entirely different beast. We hold meetings for months to prepare for that event.

How many media requests do you field?

Things aren’t the same as they used to be as media and its coverage has changed so drastically. We used to deal with opposing team media much, much more than we do now, and there used to be seven daily newspapers that covered us on a daily basis; now there are two. But requests come in all forms and, when the UW is highly ranked, and when we are playing a big-time home game against a top opponent, I will get something like 100-150 work emails in a given day.

I’m proud to be associated with our football program. The nature of sports dictates that, for most, there will always be ups and downs. And the nature of my job means that I’m, by definition, a background person. But from my close observation over all these years, I can say confidently that the vast majority of young men who play Husky football are exemplary individuals with uncommon work ethics and great attitudes. My main takeaway is that college sports, and football in particular given the large rosters, are about opportunities which in many cases wouldn’t have otherwise been available, and which frequently change families in a positive way for generations to come.

We are fortunate that the UW has so many advantages when it comes to being a successful rowing program, thanks to our location and to our long and successful history. The primary thing that has struck me over the years when it comes to working with rowers is how high-achieving they tend to be, across all aspects of their lives. What’s even more impressive is that women’s rowing is one of the few sports where athletes can arrive at the college level with no experience and, relatively quickly, become elite. The history of UW rowers with no prior experience earning Olympic medals is incredible.

Several come to mind very quickly, but the one that is the most personal and meaningful was the moment it was announced on TV that the Huskies were selected as one of four teams in the 2016 College Football Playoff. That brought a wave of emotion I didn’t expect.

The first time I attended the men’s national championships in New Jersey in 2014, the Huskies won the varsity eight race for the fourth year in a row. I’d never seen the Huskies win a national championship in person. Three years later, when the UW women became the first team ever to sweep all three NCAA grand finals—on that same lake in New Jersey—is also a top memory.

You’ve been at the UW forever. What’s next?

Thirty-plus years ago, I applied for jobs at all kinds of schools all over the country. I only got an interview for two of those positions and got one of them—at UW. It’s not an exaggeration to say it was the best job I applied for, despite being the only one I was offered. Where would I go from here? When I leave, it’ll probably be to become a barbecue caterer, or to travel with my wife and daughters.