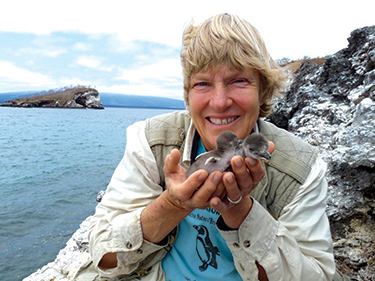 Professor Dee Boersma is behind the effort to build nests with the lava of the Galápagos Islands in order to increase the population of the endangered Galápagos penguin species. Photo courtesy Dee Boersma.

Boersma and her team spent the last three weeks of September in the Galápagos Islands, building 120 nests for the endangered Galápagos penguins.

“I’ve studied penguins off and on for the last 40 years and have been turning in my mind how we could increase their population,” she says.

“The change in climate and the more frequent El Niños are having a negative effect on their reproductive success. But right now, we’re having a cold-water event, so there’s plenty of food for penguins. It’s a perfect time for them to breed.”

The only problem? No shaded nests where they can lay their eggs and keep them safe from predators such as dogs, cats and rats. So Boersma and her team built nests along the volcanic shorelines of Fernandina, Bartolome and the tiny islets off Isabela.

“Any time you get to go to the Galápagos, it’s fun,” she says. “But carrying around big pieces of lava is hard. You’re walking over terrain that’s difficult to walk over, pounding holes in lava to make tunnels so the penguins can breed in there. It’s a construction project; it’s hard work.”

Even so, Boersma says she can hardly wait to go back to the Galapagos to see if her penguins have settled into their new homes.

“I think they’ll find them and use them,” she says. “But I won’t know until February.”