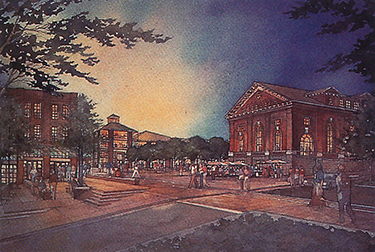 Permanent homes for the UW’s two branch campuses came closer to reality this fall, as plans for UW­ Tacoma cleared an important landmarks panel and options on property for UW-Bothell were preserved.

Plans call for the Tacoma campus to preserve the legacy of the 19th century through the renovation of five historic brick warehouses across the street from Tacoma’s Union Station.

The brick exteriors will be fully restored and brought up to current earthquake codes. Four of them will be linked together as an academic structure holding 18 classrooms. The fifth renovated warehouse will become a computer lab.

The plans also call for closing three blocks of South 19th Street, from Pacific to Jefferson Avenue. This space will become a gateway plaza. In August the Tacoma Landmarks Preservation Commission approved demolition of a tire store to make way for the plaza.

“There will be historic materials, such as cobblestones, railroad rails and brick curbstones, plus modern materials,” says Joe Brawley, the UW’s project manager. The plaza will also have trees and grass.

The total cost of first-phase construction will be $33 million. The UW branch hopes to move into its new site during Summer Quarter 1997.

UW-Bothell plans are moving more slowly. Last spring the state Higher Education Coordinating Board designated property at the intersection of 1-405 and Route 522 as the “preferred site” for UW­Bothell and a new two-year college, Cascadia Community College.

Last summer the owner of the property, the Truly farm, was in trouble with creditors. A bank issued a foreclosure notice on the property. In August the state cleared out the creditors, paying off a $8.6 million debt. In turn the owner signed a deed of trust with the state.

This preserved the state’s purchase option of $16.9 million for the property. If the bank had foreclosed, the land could have been sold at an auction for as much as $25 million, says Jim Reed, a spokesman for the higher education board.

There are wetlands on the property, and a final decision on the site will not be made until the state gets permits from regulatory agencies.

If building permits are approved, Reed says a move to the permanent, shared campus will not take place until the fall of 1998 “at the earliest.”