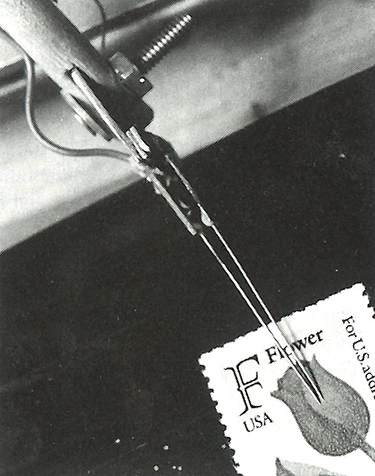 UW engin­eers have invented mini-robot arms capable of picking up and moving grains of sand. Here one is compared to the size of a postage stamp. Photo by Karen Orders.

UW electrical engineers have “shrunk” a robot arm to the size of a soft drink can, creating what could become a family of low-cost, mini-robot arms. These new arms may perform precision tasks in genetic engineering labs, surgical operating rooms, electronics assembly plants and perhaps even space stations.

The mini-robotic arm, which stands just four inches tall, was created by Blake Hannaford, assistant professor of electrical engineering, and graduate student Pierre-Henry Marbot. The robot has direct-drive joints, unlike most gear-driven small robots. The joints make it capable of extremely accurate movements to six microns—less than 1/500th of an inch.

The robot can manipulate extremely small objects such as single cells or microelectronic components. The researchers also have developed several tools for the robot—a miniature glass pipette that can penetrate a cell’s membrane and tweezers that can pick up and move grains of sand.

When Hannaford began this project in 1990, he saw the mini-robot as a solution to problems in genetic engineering, in vitro fertilization and electrophysiological research. But other uses for the mini-robot have since emerged. He sees it being used in micro-assembly work and, as the size of components shrinks, in circuit testing. Perhaps the most challenging application would be extremely delicate microsurgery, something that Hannaford admits is far in the future.