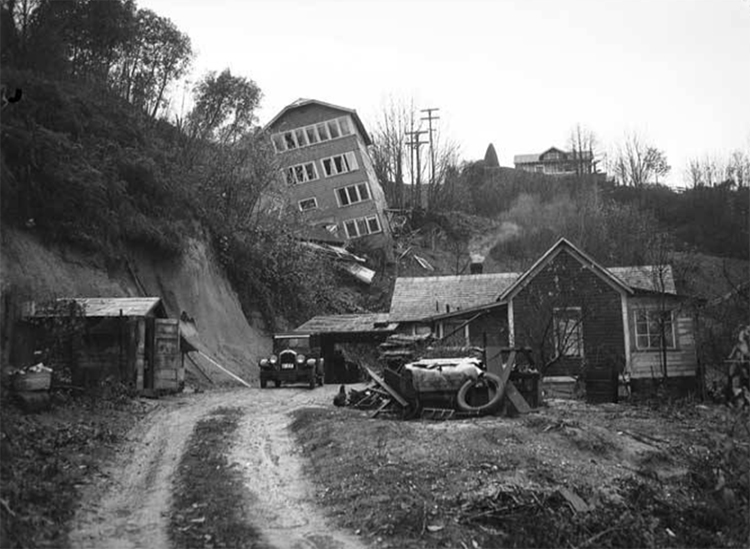 Landslides have been a problem in Washington for as long as humans have lived here. This 1934 newspaper photo shows a Seattle home sliding downhill. (Courtesy of MOHAI)

With all of its hills and cliffs and dunes—and rain—Seattle is a city of slides. In fact, 8.4% of the city’s surface is landslide prone, according to a recent city of Seattle assessment. Even so, detailed analyses of the riskiest areas are few.

So UW engineers are developing a new mapping system to quantify landslide risk in the prone areas of the city. The hope is that the new map can offer the city and the public a more complete look at different areas to estimate potential costs of damage and loss of life, says William Pollock, the Civil and Environmental Engineering doctoral student who has been working on the mapping platform for the past four years. The map—when it is released this fall—will be one of the first in the country to look at risk on a regional scale and to more clearly quantify that risk. “This will help city planners know how to prioritize resources,” Pollock says. The city’s mitigation can include preventing development, installing retaining walls and horizontal drains, and public outreach.

Today’s landslide maps for Seattle only identify the location of landslide-prone areas. “A unique part of this work is that we are not looking at just one type of landslide, but different types,” Pollock says. Different slides have different effects on roads and structures.

Also, traditional landslide maps do not explicitly consider risk, says Joseph Wartman, the CEE professor working with Pollock. “Is essential to do so since this is the best way to assess the likely consequences of landslides, not just their occurrence.”

Washingtonians have had a heightened landslide awareness, especially after the deadly Oso landslide in 2014. The M9 project, a recent research collaboration across several UW departments explored how a Cascadia Subduction Zone earthquake may trigger landslides throughout the area. “The Oso landslide and the M9 Project both highlighted the urgency of understanding the landslide hazards and—especially—risks in the Pacific Northwest,” Pollock says.

In Seattle, the majority of landslides are either large and slow-moving or small and rapid. Many are activated during the rainy season of winter and spring. It’s not uncommon for landslides to travel long distances and reach areas that are not generally considered landslide prone.

The landslide risk map will be part of a suite of maps to provide the public with comprehensive information about landslides—from estimated recurrence to how they are triggered.

As Pollock refines his risk map, he is visiting hotspots such as West Seattle and Magnolia to verify his data. As he and Wartman publish their findings in coming months, they will also present their results to city officials and seek community engagement.