UW has always been a part of Brewster Denny, ’45 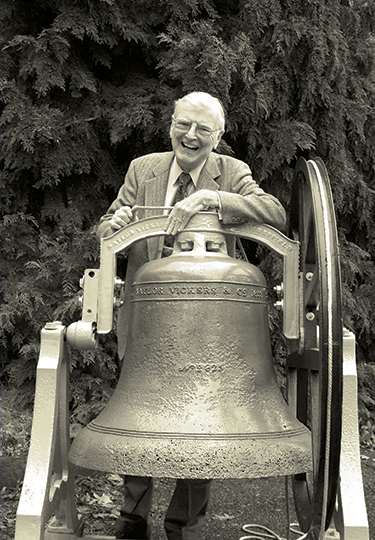 Brewster Denny with the Denny bell.

Many Husky families have UW roots that go back generations, but no one has deeper roots than Brewster Denny, ’45. His great-grandparents, Arthur and Mary Denny, led the group of pioneer families who founded Seattle, landing at Alki Point in November 1851. A decade later, the Dennys donated more than eight of the 10 acres in what is now downtown Seattle as a site for a new Territorial University.

After earning his bachelor’s degree in English from the UW in 1945, Denny, now 86, went on to spend much of his life serving the University, the city, and the state his great-grandparents helped to create.

Born and raised in Seattle, he attended Roosevelt High School and then the UW. World War II and Naval ROTC dominated his college years, although he still found time to take on leadership roles, including chairing the Student Union Building Committee—which planned the HUB. After graduation, the Navy sent him to Pearl Harbor, where he went into training for the U.S. invasion of Japan when the war ended in August 1945. He was later recalled to active duty and served during the Korean War.

Denny returned to the UW for graduate study after the war, but soon left to attend the Fletcher School of Law and Diplomacy at Tufts University, where he earned an M.A. and Ph.D. He worked as a national security adviser and intelligence analyst in a variety of roles, including serving on the staff of U.S. Senator Henry M. Jackson, ’35, and the transition team for President John F. Kennedy.

It was a heady time for a young man who believed in public service to be in Washington, D.C. But in 1961, he was called home by UW President Charles E. Odegaard, who asked him to create an academic program in public affairs.

Denny has told the story many times, and it is still vivid in his memory 50 years later: “Charles Odegaard is an idol of mine—there’s no other way to describe it. He was a tough Norwegian; I’m only half Norwegian, but I know what a tough Norwegian is! He said to me, ‘You know, I can’t give you this school. I can’t just say, “Here it is—go!” because it doesn’t work that way in universities. You have to find supporters—people who think it’s a good idea. If you can’t do it, and you come back to me and say you couldn’t do it, there’d better not be anything that I could have done to help you get it done that you didn’t ask for.’ Charles and I were very close, but I still called him Dr. Odegaard. He commanded that kind of respect.”

Brewster Denny succeeded. By 1968, the program he established had grown so much that the Board of Regents created the Graduate School of Public Affairs with Denny as its first dean, a position he held until 1980. Throughout his decades as a faculty member, Denny’s civic activities extended well beyond campus. He helped to reform and restructure government at the city, county, and state levels. On the national level, he used his expertise in diplomacy and national security as a U.S. Representative to the 23rd General Assembly of the United Nations (1968-69) and other roles, including presidential task forces. He also served on countless boards and civic enterprises, both public and private. In 1984, the UW Alumni Association presented him with its Public Service Award.

Denny is looking forward to ringing the bell atop Denny Hall as part of the University’s 150th anniversary celebration. Denny Hall—the oldest building on the UW Seattle campus—is named for his great-grandfather, and the bell once hung in the original Territorial University building downtown. Denny has rung the bell during Homecoming every year since 1961, when he rang it for the University’s centennial.

Although he can no longer climb the stairs to the belfry—he uses a wheelchair these days—his wife Patricia, their daughter Maria and her children Ella and Jacob will help him pull the bell ropes.

Antoinette Wills has been at the UW for 41 years, as a student (Ph.D., History, 1975), and staff member. She frequently writes about University history.