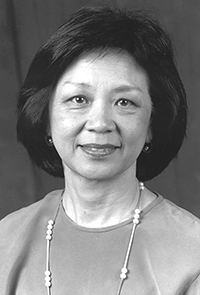 Phyllis Wise, former dean of the Division of Biological Sciences at the University of California, Davis, became UW provost Aug. 1. As the University’s chief academic officer and chief budget officer, the provost is the second-highest position on the UW’s leadership team. The position is responsible for the University’s annual budget of nearly $3 billion, including nearly $1 billion in sponsored research.

Wise is the second woman and the first Chinese American to serve as UW provost. She is the daughter of immigrants. Her father was a physician whose career was devoted to research and her mother was a nurse educator. “In my family, it was always expected that we would continue our education after high school and indeed after college,” she says. Wise earned her bachelor’s degree in biology at Swarthmore College (1967) and her master’s and doctoral degrees in zoology at the University of Michigan (1969 and 1972).

Her scientific work has centered on hormones, especially estrogen, and she was named one of America’s “quiet heroes” in a 2004 cover story in Parade magazine for her research into the mysteries of menopause. At the UW, Wise will continue a small portion of her research—one project on how estrogen helps prevent brain injury and degeneration and another on how the brain ages.

As dean of biological sciences at UC Davis she chaired the group that oversaw life science initiatives, including the Genome Center Initiative, the Center for Neuroscience, the Center for Population Biology and the Bodega Marine Laboratory. Her academic career also includes administrative and faculty positions at the University of Kentucky in Lexington and the University of Maryland, Baltimore.

For her work on estrogen, the National Institutes of Health has twice given her a MERIT award for innovative research over an extended period of time. This highly selective award is presented to researchers who have demonstrated superior competence and outstanding productivity.

“She brings all the requisite skills and values needed to be the provost of one of America’s top research universities: an eminent scientist, a brilliant educator, a talented leader,” says President Mark Emmert, ’75. “I am delighted she will be joining our administrative team. She will find a remarkably innovative and collaborative institution ready to take on the next generation of intellectual challenges. She will provide exceptional leadership for the university, enabling our students, faculty and staff to accomplish even greater things in the future.”