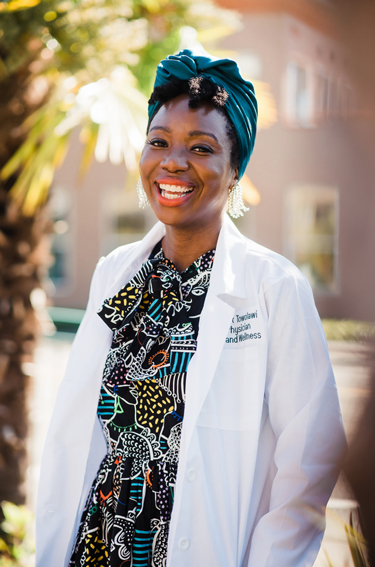 When she started medical school at the UW in 2006, Margaret Towolawi was the only Black student in her entering class. She graduated in 2010, finished her family medicine residency training at the UW in 2013, and later worked at Swedish Richmond Beach Primary Care where she was the only Black doctor. Now, 15 years after completing her medical studies, she has opened one of the few Black-owned membership-based primary care practices in Washington.

She follows the direct primary care model (DCP), which is designed to provide a stronger, more trusting doctor-patient relationship and more personalized comprehensive care. Patients have more access to their doctors, with the added bonus of a monthly membership rate paid directly to the physician instead of the typical third-party payment model. This monthly payment model covers extended visits, labs, consultative services, care coordination and comprehensive care management. For those patients who pay expensive monthly insurance premiums, this model can create substantial savings.

After working in a major primary care setting for years, it was especially important to Towolawi that she operate in a way that empowered the patients by arming them with the tools to make better, healthier choices. She helps her patients eat healthier. Through her “Shop with Your Doc” program, she shares “Dr. T’s recipes” and does a “book of the quarter” for her patients. “It’s just really giving people the knowledge,” she says. “Knowledge is power.”

Towolawi resigned from Swedish in August of 2020 and opened Nurture Well Center less than a year later. Now, she is able to provide personalized care. Her appointments are one-hour long, which allows her to sit with each patient to get to the root of their issue. This also allows her to focus deeply on communities that are the most at risk.

According to the National Academy of Medicine, “racial and ethnic minorities receive lower-quality health care than white people—even when insurance status, income, age, and severity of conditions are comparable.” Towolawi has also worked telehealth urgent care shifts outside of her practice and has seen these disparities time and again. Recently, an older Black man experiencing chest pain called Towolawi from an emergency room. “He and his wife were on the video call,” she says. “He said he’d been in the emergency room for six hours. No one had been communicating with him. He felt like he was not respected, not even offered a cup of water. He was using telehealth even though he was at a hospital emergency room because he felt he was not feeling heard or seen, and it just broke my heart.”

Towolawi opened her practice to address such disparities. While heartbreaking, experiences like her telehealth patient’s are not uncommon. She tells people to trust their guts: If something seems off, they should seek care elsewhere. “It’s something that happens far too often,” she says. She works to give them the tools to manage their situation or refers them to someone who can give them the care they deserve.

Towolawi says she hopes more people will consider direct primary care as an alternative to traditional care. She is also passionate about spreading the word about lifestyle medicine. Merging DPC and lifestyle medicine has allowed her to make the type of care she once dreamed about a reality .

Our apologies to Dr. Towolawi and the Black physicians who have opened primary care practices in Washington over the decades. We did not intend to ignore or erase their important contributions and impactful legacies. We regret the error and are sorry for any harm this may have caused.