It takes years before significant breakthroughs show up at your doctor's office. Why? To make sure the innovations actually work. That's why UW Medicine is so committed to conducting clinical trials.

Here, we present the tales of two clinical trials of technology that one day could alleviate suffering and improve lives for the hundreds of thousands of people suffering from severe heart problems and kidney failure.

Heart in a box 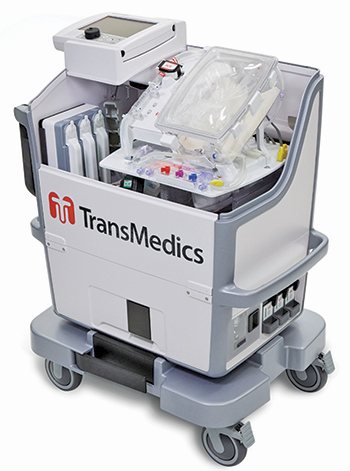 Ted Daniels spent 27 years waking up at 3 a.m. so he could tromp around knee-deep in forest muck and drive a logging truck all over western Washington. It was a slog, but it provided a living for his family in Aberdeen.

Then, things started to go wrong. At age 36, Daniels joined the ranks of 5.1 million Americans suffering from heart failure. About half of heart-failure patients die within five years of being diagnosed. Scary stuff for someone whose children were ages 21, 15 and 6. He was hospitalized for a month and wasn’t happy to hear over the hospital loudspeaker that “this guy’s heart is twice the size it should be.”

But he recovered enough to be discharged, prescribed medication and sent on his way. In the summer of 2014, things got really frightening. His kidneys and liver started to shut down, and it wasn’t long before he was admitted to UW Medical Center. There, surgeons inserted a Ventricle Assist Device, a mechanical pump that supports heart function and blood flow in people who have weakened hearts. However, the device stopped working after awhile and he needed a new heart. Daniels had already spent six months on the UW Medicine heart-transplant list.

Normally, a heart transplant goes like this: The retrieving team has only four hours to remove the heart from the donor and transport it. The heart is harvested and packed in ice in a plastic lunchbox-like cooler so it can be delivered to the hospital where the transplant will take place.

But Ted Daniels’ heart transplant changed all that. He was the first patient in the nation to receive his new heart in a device called a “Heart in a Box,” an out-of-body circulatory system that is being tested by UW Medicine and six other U.S. medical facilities.

The device—which looks like a small dishwasher—circulates blood into the aorta and the heart’s arteries, allowing the donor heart to continue beating. This means medical personnel now have up to 11 hours to get the donor heart into the recipient, a vast improvement over the current four-hour limit.

Daniels’ new heart was brought to Seattle by Jason Smith, assistant professor of cardiothoracic surgery, from 1,500 miles away. That’s a distance previously unheard of in the 30-plus years heart transplantation programs have existed. The seven extra hours offered by the Heart in a Box provides great hope for the 250,000 patients in the U.S. who are waiting for a transplant. Currently, only 25,000 transplants are done in the U.S. each year.

As for Daniels, he’s taking several medications to prevent his body from rejecting the new heart. He’s thrilled to be alive and to be able to spend time with his wife, Nikkol, son Jared and daughters Nadia and Ella. He’s also delighted that he holds a place in the history of heart transplantation.

It seems that kidney failure is becoming an epidemic in America. Right now, more than 450,000 people in the U.S.—roughly the population of Atlanta—undergo dialysis for irreversible kidney failure. And the way things are going, that number looks like it will keep skyrocketing. In a period of 29 years (1980 to 2009), the number of individuals suffering from end-stage kidney disease leapt nearly 600 percent. That’s a bump from 290 to 1,738 cases per million.

With end-stage kidney failure, patients require dialysis. This effective treatment is a time-consuming process that takes hours each week while a person is tethered to a machine that cleans their blood. This process must be repeated again and again because, in between dialysis sessions, toxins that would normally be eliminated by healthy kidneys accumulate in the body.

So it was really encouraging when the Food and Drug Administration granted “expedited access pathway” status to the UW’s clinical trial for a Wearable Artificial Kidney—the first in the U.S. The FDA is so encouraged with the early results that it has pushed the UW clinical trial to the front of the line for receiving final approval for nationwide use. That’s huge—and it could mean the artificial kidney could become a reality within the next decade if it proves safe and effective in trials. Jonathan Himmelfarb, professor of medicine and director of the UW Kidney Research Institute, and Larry Kessler, professor of health services in the School of Public Health, are leading the UW’s study.

Of the seven people who wore the artificial kidney during the trial at UW Medical Center, five completed the full 24 hours of treatment. These patients were able to walk in the hospital’s halls while the device continuously cleaned their blood. (Two others stopped their trials early because of technical issues with the device.)

Chuck Lee, 73, who has lived with diabetes for 40 years, volunteered to be the first test subject for the clinical trial. The Bothell resident enjoyed the freedom the device provided as well as the opportunity to consume treats not typically recommended for dialysis patients: Cheetos, mac and cheese, and fruit juice.

The next step: refining the wearable battery-powered artificial kidney to correct some glitches, and to reduce its weight from 10 pounds to between six and eight pounds. But even with those improvements, the device isn’t for every kidney patient.

“For some people who are frail, the weight [of the device] may be too much,” Kessler explains. “Plus, patients will need to maintain the device and if it isn’t done right, the machine may not work properly. The device also requires central venous catheter access, a tube that goes directly into a vein, usually in a patient’s neck or chest. If the catheters aren’t kept clean, there could be infections and those are a real risk to people.”

For those who can manage these issues, the wearable artificial kidney could provide liberating mobility and end the need for a restrictive diet. Once the artificial kidney’s redesign is finished, clinicians will go back to the FDA to seek approval for the next set of studies. Millions of fingers across the nation are crossed.