UW probes whether bacteria is a factor in heart disease

Rod Vroman had just bicycled 19 miles around the Marymoor Park Velodrome in Redmond when it hit him: nausea and a burning sensation down his left arm. “I was 45, a typical “type A” male with cholesterol over 400. I was overweight and sedentary. I also had just finished a high stress job, being principal of a junior high school,” he recalls.

Medic One arrived within five minutes and took him to Evergreen Hospital, where he was diagnosed with a moderate myocardial infarction (heart attack) and treated with the clot-buster Streptokinase. He also underwent quintuple bypass surgery within days.

Now age 60, Vroman has enjoyed 15 years of good health by taking his medication, eating right and exercising. Vroman is a lucky man. Coronary heart disease is the number one cause of death in the United States, killing 476,124 in 1996. Every 29 seconds someone is struck by cardiac arrest.

But until 1989, no one considered that a common, pear-shaped bacterium whose traces can be found in 80 percent of all men and 70 percent of all women on Earth could be a key to the killer. 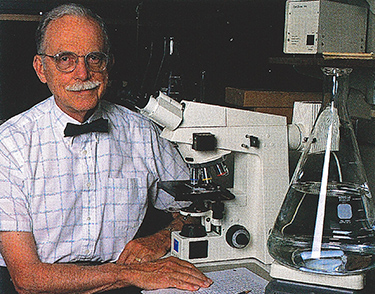 Even UW Epidemiology Professor G. Thomas Grayston, the man who discovered the microbe, had no idea it could be dangerous. When he came across it in 1966, “we regarded it as a laboratory curiosity,” he says.

Grayston was working on a strain of Chlamydia that causes eye disease. While trying to develop a vaccine, Grayston happened upon a new isolate or form of the bacterium, which he named Chlamydia pneumoniae. Back then, the idea that any bacteria might actually be at the root of heart disease seemed almost preposterous.

Two years later, Grayston confirmed this association between C. pneumoniae and heart disease. The fact that this germ might be a cause of the nation’s number one killer was such a shock Grayston told an interviewer the experience was like finding out that an old acquaintance might be an ax murderer.

Grayston is now principal investigator of an $11-million grant to see if killing this bug reduces heart attacks. Doctors will prescribe antibiotic treatment for 4,000 patients with coronary artery disease at 26 clinical centers across the United States, including centers at Harborview and Seattle’s Group Health Cooperative. Grayston hopes that if antibiotics can eliminate or render C. pneumoniae harmless, then people infected with the bacterium might have fewer heart attacks. The grant is funded by the National Institutes of Health and the Pfizer Corporation.

This new effort follows nine other studies conducted by UW researchers looking at the relationship between C. pneumoniae and heart disease. They have found the organism in the diseased parts of arteries of people of different ages and ethnic backgrounds. Results have been confirmed by scientific investigators worldwide.

But it is much too early to assume C. pneumoniae is the killer, says Grayston, the founding dean of the UW School of Public Health and Community Medicine. A scientist all of his working life, Grayston remains ever skeptical and detached.

“We know that everybody has arteriosclerosis by the late teens, and we also know that C. pneumoniae is frequently found in arteriosclerotic lesions, but we don’t know that it isn’t coincidence,” he observes.

Grayston and colleagues’ early research revealed that C. pneumoniae is a kissin’ cousin to the strain of Chlamydia that causes sexually transmitted disease. By culturing the throats of UW students coming to Hall Health with flu-like symptoms, Grayston found that C. pneumoniae causes nasty respiratory problems such as bronchitis and stuffed-up sinuses. It can lead to acute respiratory problems like pneumonia. The bacterium is transmitted from person to person via sneezing and coughing. Most people in the world have antibodies to C. pneumoniae, which means that most people have encountered the microbe at some time during their lives.

When C. pneumoniae settles in the body, the immune system dispatches special cells called macrophages to attack the invaders. Grayston thinks the bacteria may survive even after being “consumed” by the attacking macrophages. They may hide inside the cells and “hitch a ride” around the body, initiating damage and inflammation in the arteries or making it worse.

“We don’t know how it all develops, but we do know that an arteriosclerotic lesion is an inflammatory process. The body’s white blood cells are attracted to these lesions and the bacteria may travel with them. On the other hand, the bacteria may be an innocent bystander,” says Grayston.

The most extensive series of studies with tissue from heart arteries was done in Seattle after a South African pathologist noticed the odd, pear-shaped organism on slides of diseased heart arteries he was examining with an electron microscope. The pathologist sent the slides to Grayston, who confirmed that the organism was his old friend, C. pneumoniae. Then, Grayston studied artery tissue from 362 people, from autopsies and heart surgeries. Overall, the bacterium was found in 55 percent of patients’ tissue.

Despite the potential magnitude of this discovery, getting the tissue samples so they could look at plaque in arteries wasn’t always easy, says Epidemiology Professor Lisa Jackson, deputy director of the antibiotic heart study.

“Initially, there wasn’t a lot of interest from potential collaborators and there was a fair bit of skepticism. But now I think the feeling is that, while we certainly haven’t established the link between infection and heart disease, that it is a very active and interesting area of research,” says Jackson.

Medicine has often taken a skeptical stance when bacteria are blamed for disease. In the 19th century, doctors initially resisted advances made by pioneers such as Joseph Lister and Louis Pasteur. In the 1980s, the medical community was stunned when two Australian researchers declared that Helicobacter pylori, a bacterium found in the stomach lining, was the cause of most ulcers and that a quick course of antibiotics could cure patients (See below). At the turn of the century, the theory that bacteria might be wreaking havoc with human hearts has struck some in the medical community as dubious.

Since the mechanics aren’t understood, some question forging ahead with an $11-million clinical study. But the payoff is worth the risk, Grayston says. “Why are we doing a clinical trial when we haven’t proven the organism causes the disease? We all recommend that people not smoke. This is accepted, but the actual mechanism isn’t known. Heart disease is such an important disease that, if we could do something that was safe, it might be worth jumping ahead of the basic science and start saving lives.”

All of the study’s participants have either had a previous heart attack or evidence of heart disease. For a year, each participant will receive a weekly dose of the antibiotic azithromycin or a placebo. The study is double-blind, meaning that neither the participant nor the doctors know which patients are receiving drugs or placebo. Grayston’s team will follow the patients for about four years to monitor for coronary events. These can include hospitalization for heart pain, coronary artery bypass, angioplasty, heart attack or death due to complications of coronary artery disease.

Even if the study fails and there is no evidence that patients receiving medication have fewer heart incidents, it doesn’t necessarily prove that C. pneumoniae is not part of the cause. Grayston says that the bacterium is notorious for being hard to kill. Perhaps patients need medication before heart disease has progressed very far; perhaps they need treatment for more than a year to reap the benefits. Although azithromycin was chosen because it is known to be effective against C. pneumoniae, it might not be able to track down and wipe out the bacteria as effectively as hoped, Grayston speculates.

Grayston is sometimes asked by physicians and patients alike whether antibiotics are worth a try right now. But Grayston believes nothing now indicates antibiotics should be used to treat heart disease. “There is no justification for treatment of patients with coronary artery disease with antibiotics. The introduction of yet another unproved treatment into practice should be discouraged. The use of antibiotics for unproved reasons can add to the increasing problem of antibiotic resistance,” he warns.

If research proves that antibiotics can help prevent heart disease, does this mean that those who watch their cholesterol intake, exercise regularly and consume a low-fat diet can finally go for the gusto, eating cheeseburgers apace and reveling in sloth? Hardly. Grayston says diet, exercise and abstaining from tobacco are still key to keeping a heart healthy.

It will be several years before there are any answers to the study. “It could be harmless. Yes, I think it could. But I’m a public health guy and if I can stop a lot of disease, I’ll be happy,” says Grayston. “Other people can work out the mechanism. No one experiment will give a complete answer, but I’d like to see the answer to this story.”

The guts of the matter

Everybody knew the facts about ulcers. Caffeine could trigger an attack. Spicy food should be shunned. Stress had to be avoided at all cost. People with ulcers were resigned to consuming bland food and Malox.

That was until 1983 when Barry Marshall and Robin Warren, two physicians from Perth in Western Australia, published a theory so fantastic that it drew scorn from colleagues. They said that diet and stress weren’t responsible. They proved that the cause of most ulcers was a bacterium called Helicobacter pylori that lurks in the stomach lining of most patients with gastritis and ulcers.

The inside of the stomach is a veritable pit of gastric juice composed of enzymes and hydrochloric acid that can eat through most anything. That’s why a thick lining of mucus layers and protects the stomach lining. And it is there that Helicobacter pylori hide.

For those who suffer from ulcers, he recommends treatment with a proton pump inhibitor (drugs such as cholriythromiocin and oxoxymicin metronidazole) in combination with two antibiotics. The inhibitor reduces the production of acid and the antibiotics attack the bacteria. Kearney said that this regimen dramatically lowers the recurrence rate of ulcers.

“Previously, up to 70 percent of people with duodenal or gastric ulcers would have a recurrence within a year. This lowers the rate to less than 10 percent,” he says.

Formerly, doctors would use an endoscopy to detect an ulcer. That meant sedation, an IV, and looking into the stomach with a tube. Now, there’s a simple breath test that can detect the presence of the bacterium. The test can’t confirm that there is an ulcer, but if a patient comes in symptoms of ulcer and the Helicobacter pylori is present, it may be likely that the antibiotics in combination with an acid reducer can solve the problem.

Just as ulcer patients lives have changed, so have the lives of Barry Marshall and Robin Warren. The pair have won the Warren Alpert Prize from the Harvard Medical School and Germany’s Paul Ehrlich Prize. Marshall won the prestigious Albert Lasker Award in 1995 and both men have been mentioned as possible Nobel Prize winners. As an Australian colleague told the press, “It is one of the major breakthroughs in this century. They both should get it.”

Julie Garner is a free-lance writer in Snohomish, Wash., who writes frequently on the social sciences and health issues.