UW researchers have a cool idea for computer chips 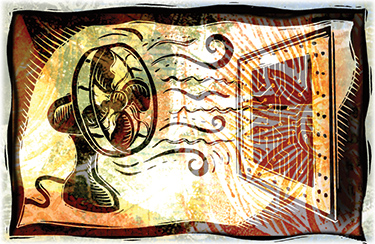 Computers in the future will be smaller and run faster only if someone figures out how to keep them cool. Because their computer chips will be more tightly packed and are likely to run hotter, tomorrow’s computers need cooling systems far more efficient than the fans and heat sinks used today.

Rather than create some kind of super fan, University of Washington researchers have succeeded in building a cooling device tiny enough to fit on a computer chip. Their tests show that the device works reliably and efficiently with the smallest microelectronic components.

The invention uses an electrical charge to create a cooling air jet right at the surface of the chip. “That allows for cooling in applications and spaces where it just wasn’t realistic to do before,” says Electrical Engineering Professor Alexander Mamishev.

“The idea has been around for several years,” he adds. “But until now it hasn’t been physically demonstrated in terms of a working prototype.”

The device utilizes an electrical field to accelerate air to speeds previously possible only with the use of traditional blowers. Trial runs showed that the prototype device significantly cooled a heated surface on just 0.6 watts of power.

The findings are significant for future computing applications, which will incorporate denser circuitry to boost computing power. More circuitry equals more heat and a greater need for innovative cooling technologies that go beyond bulky, noisy and relatively inefficient fans and heat sinks. Circulating liquids among the chips to draw away heat is one possibility, but computer chips and liquids don’t mix well; the cost of a cooling system breakdown could be steep.

A few challenges remain, Mamishev adds. One involves developing the mathematical models to control vast systems of chips with built-in coolers. A second challenge is identifying the best materials to use in building devices that are high-performing and durable.

UW researchers and collaborators with Kronos Advanced Technologies and Intel Corp. have been awarded a $100,000 grant from the Seattle-based Washington Technology Center for the second phase of the project.