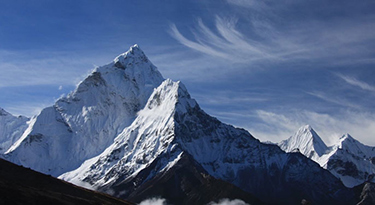 Thanks to a grant from the National Science Foundation, Earth and Space Sciences Professors Bernard Hallet and Howard Conway are trying to determine whether glaciers speed up or slow erosion in the Himalaya. Their team is working to figure out erosion rates for the Khumbu basin at the foot of Mount Everest.

The researchers hope to contribute to the understanding of how global warming affects glaciers in the Himalaya. Millions of people could be affected by increases in runoff due to accelerated melting of glaciers. Moreover, as glaciers dwindle, the result could be a diminishing supply of fresh water.

“The rivers that drain from there are some of the biggest rivers in the world; they emanate from the glaciers in the Himalaya and Tibet, and sustain about 2 billion people,” Hallet says.

The study will help scientists understand the interactions between snow and debris that sustain massive low-latitude glaciers and shape high mountains.