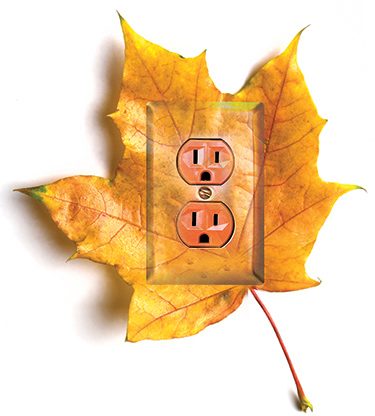 Trees generate up to a few hundred millivolts of electricity—not much and far less than a AA battery can produce. So team member Brian Otis, assistant professor of electrical engineering, led the design of a boost converter chip, which stores up tiny amounts of energy and increases the voltage level. Otis and his team also designed a clock that runs on one nanowatt, about a thousandth the power used by a typical wristwatch.

To test the circuit, the researchers tapped a bigleaf maple on campus, just off the Burke-Gilman Trail and next to the pedestrian bridge leading to the Intramural Activities Building. But you probably won’t be plugging your MP3 player into the nearest trunk anytime soon. Even with the boost converter, the power that can be harvested from a tree is very limited. Tree power could be sufficient, however, to run sensors to detect forest fires or monitor other environmental conditions in forests.

The electrical currents might also help researchers understand and monitor the health of the trees themselves. “I’m interested in applying our results as a way of investigating what the tree is doing,” says team member Babak Parviz (that’s the same Babak Parviz who’s developing bionic contacts—he has a wide-ranging interest in the interface between biological and electronic systems). “When you go to the doctor, the first thing that they measure is your pulse. We don’t really have something similar for trees.”

Meanwhile, a different take on tree power comes from a team at the UW School of Forest Resources. They were recently asked by the Washington state Legislature to analyze how woody biomass—what’s left over after logging and thinning forests and manufacturing wood products—could contribute to the state’s sustainable energy goals.

Potentially 11 million dry tons of woody biomass are available annually in the state, the team estimated. They concluded that converting this wood waste to biofuel for transportation (rather than burning it to generate electricity) would do the most to help reduce greenhouse gas emissions and the state’s dependence on imported oil.