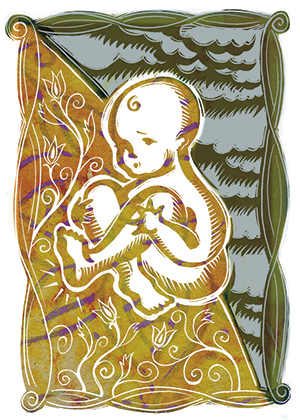 It is a cruel tragedy that strikes seemingly healthy babies. For the first few months to a year, they seem normal. Then the child becomes blind, deaf and unable to swallow. Muscles begin to atrophy and paralysis sets in. Other symptoms include dementia or seizures. The worst cases result in mental retardation and death by the age of 5 or 6.

These children are suffering from rare met­abolic diseases such as Tay-Sachs, Fabry and Gaucher syndromes. Physicians have known for years that these maladies are caused by enzyme deficiencies. Now a team of UW scientists has invented a relatively simple screening process to detect these deficiencies in newborns, allowing treatment to begin before too much damage has been done.

“All of the damage from these diseases is permanent, so if you can start treatment early, in a few weeks or months, you can begin to minimize the damage,” says UW Chemistry Professor Frantisek Turecek, a leader in the research effort.

The technique uses a spot of blood drawn from a baby’s heel and dried on a paper card. Scientists then use mass spectrometry to measure target enzymes, looking for chemical signs of diseases. The sample can be screened for perhaps 15 enzyme deficiencies at the same time, and the entire process typically will take less than two days, Turecek says.

Some of the telltale symptoms can be very similar among all these diseases, making a medical diagnosis difficult, particularly early in life when the symptoms are not readily apparent. The new screening method provides precise diagnosis very early, so newly developed drugs can be given in time to repair the break in the body’s biochemical chain and stop further damage.