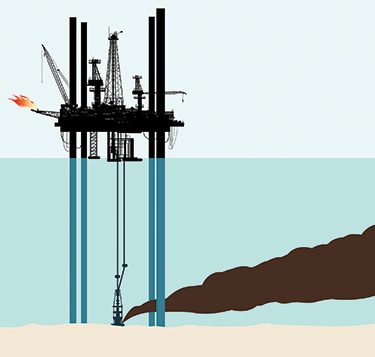 In the past, James Riley and Alberto Aliseda investigated questions including how blood moves through the body’s arteries and veins, and how seawater flows across tidal energy turbines. But blood and water also have something in common with oil, and so the two UW mechanical engineering professors were tapped by the federal government earlier this year to help figure out the amount of petroleum spilling from the Deepwater Horizon blowout in the Gulf of Mexico.

The two were part of the Flow Rate Technical Group, a panel of 22 government and academic scientists that, in mid-June, said that up to 2.5 million gallons of oil were flowing from the wellhead every day. Their estimate was two orders of magnitude higher than the initial numbers BP had released two months earlier, and helped the government refine containment and cleanup plans appropriate for the scale of the disaster.

To arrive at that number, the panel split into three groups, each of which used a different method to come up with an independent estimate. Riley and Aliseda’s team undertook a painstaking, frame-by-frame analysis of video from the underwater leak. The work was challenging on several levels. “From the time we were given the videos to the time the results were needed was very short, generally a few days,” Riley says—a crisis-fueled investigation that was very different from the usual deliberate pace of academic research. “Furthermore, we were only able to examine, at most, a few hours of video.” That complicated calculations because the oil’s flow rate could change over longer time periods.

For its analysis the video team used a method known as particle image velocimetry (PIV), “which is often used in the laboratory, but not under the conditions applied in this case,” Aliseda says. “We now know what laboratory experiments are required to determine how PIV can best be used to estimate the flow rates from oil spills.” Riley and Aliseda are currently exploring funding to undertake such experiments, which could make it easier to develop accurate estimates of flow rates in future oil spills.