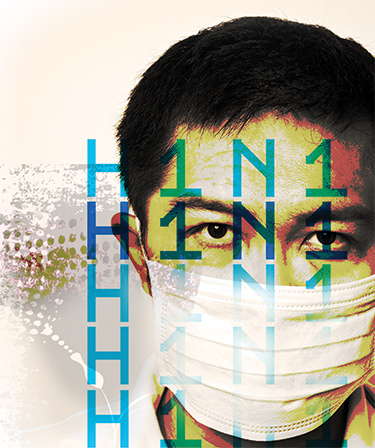 When a new influenza virus, Influenza A H1N1, or “swine flu,” emerged last spring, Anne Marie Kimball, a professor of epidemiology and health services at UW School of Public Health, was on the front lines of the information response. Kimball directs the Emerging Infections Network (EINET) for the Asian Pacific Economic Cooperation (APEC), providing 1,000 users in 21 APEC countries with weekly bulletins about new infections and treatments. “When the H1N1 [outbreak] started we became the Cooperation’s official disease alert function,” Kimball reports, helping broadcast key messages from Mexico in particular.

Meanwhile, other researchers, including Fred Hutchinson Cancer Research Center biostatisticians Ira Longini and Elizabeth Halloran, raced to get ahead of the story and predict what the virus would do next. The two are part of the MIDAS project (Models of Infectious Disease Agent Study), a national effort to use computer modeling to predict how infectious diseases might spread and how public health measures affect that spread. The most effective tool to stop the virus would be widespread vaccination, Longini and Halloran’s research has shown.

As soon as an H1N1 vaccine is available, UW scientists involved in the Vaccine Treatment and Evaluation Unit (VTEU) will help get it ready for that widespread use. The VTEU, a collaboration between the Group Health Center for Health Studies, Children’s Hospital Research Institute, and UW, tests the safety and effectiveness of new vaccines and responds to emerging public health threats. VTEU principal investigator and UW School of Public Health professor Lisa Jackson said she expected clinical trials would begin before the end of the summer.