UW students to the rescue after devastating quake in China 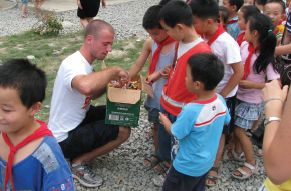 UW student Steve Margitan hands out candy to children in the quake zone.

In a world full of nonprofit organizations with vague, abstract and sometimes grandiose names, it’s hard not to love China Earthquake Aid. The charitable group set up by two UW students after the May 12 earthquake in China’s Sichuan Province has been as no-nonsense as its name, raising $65,000 for children in the disaster zone and winning a prestigious award. The Foundation for International Understanding Through Students, founded in the 1940s and based at the UW, recently recognized China Earthquake Aid with its Shigemura Award for International Understanding.

Steve Margitan and Geoff Morgan were studying at Sichuan University when the earthquake hit. They and five other students from that university and the UW quickly raised $8,500, then used it to distribute several hundred pounds of school supplies, some 900 English/Chinese dictionaries and 10 pounds of candy to students in Dujiangyan, the city closest to the epicenter of the 7.9-magnitude earthquake.

They also asked friends, family and former teachers to send cards and letters for the children of Dujiangyan. Word spread, and they ended up with 5,700 notes—a stack about three feet high. “We got cards and letters from people and places we had never heard of,” Margitan says.

Subsequent donations totaled more than $56,000 — funds that Margitan and Morgan hope will help them open a teacher resource center in the earthquake region.