UW team works to make sure the world remembers Rwanda 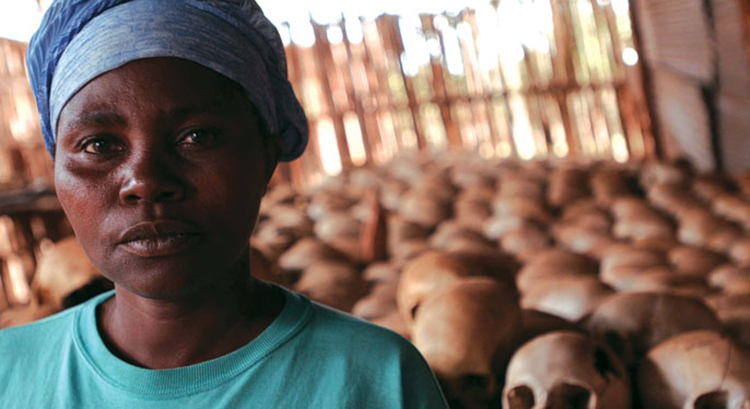 A survivor stands before hundreds of skulls at a Rwanda genocide memorial.

For 12 years, the Rwanda war crimes trials have dragged on as a United Nations-sponsored tribunal attempts to bring to justice those responsible for the killing of 800,000 Rwandans during 100 horrific days in 1994. A team headed by UW Information School Professor Batya Friedman is working to make sure the world never forgets.

With the recently compiled oral history Voices from the Rwanda Tribunal, Friedman’s group has collected stories from those involved in the trials, conducting 49 video interviews and taping 70 hours of conversations with judges, investigators, interpreters, defense counsel and prosecutors.

It is the first collection of court personnel memories from this dark time in world history. It is also the first time a technology has been used to authenticate and prevent tampering. Friedman and Tadayoshi Kohno, UW assistant professor of computer science, created a simple-to-use digital technology that authenticates Tribunal Voices and collections like it so that even subtle attempts at tampering can be detected. It’s part of Friedman’s work on information systems for human problems that cannot be resolved in a single lifespan.

This past summer, the 10-person Friedman team—which includes legal experts, professional cinematographers and UW specialists in information systems—shared the interviews in Rwanda, hoping to make them part of both healing and remembering. The tapes are stunning. In one, you meet prosecutor Hassan Jallow, who has confronted individuals responsible for masterminding hundreds of thousands of killings—yet needed all the courage he could muster to ask his driver how he copes with the slaying of his entire family.

Then there is the interview with court prosecutor Charles Phillips, who describes a dilemma he faced. A woman presented him a credible story about being raped, but she hadn’t told her husband about it. If she had told him, the woman told Phillips, “I wouldn’t have a husband today.”

Phillips decided that ethics forbade him from jeopardizing the woman’s marriage—so he abandoned the witness.

The Friedman team shared the Phillips interview with a number of people, including the director of Hope After Rape, a nonprofit group. It became part of a post-rape workshop in eastern Congo.

“Sexual violence was used to dehumanize people, to spread disease in an intentional way,” Friedman says. “Women were mutilated. … It is a way to destroy a people—physically, mentally, emotionally.”

More details about Friedman and her team, as well as interviews in English, French and Kinyarwanda, can be found at www.tribunalvoices.org.