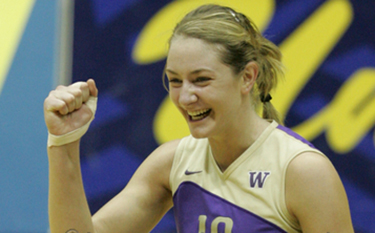 For those who follow college volleyball, the West is the best. The Pac-10 is the conference of champions, having won 13 national titles since 1981 and five of the last nine. Perennial powers Stanford, USC and UCLA have taken all but one of those crowns.

Washington owns the other.

But there’s more to UW volleyball than one national championship. The Huskies have been a top-10 program for nearly a decade and are 221-60 in coach Jim McLaughlin’s nine seasons. In 2001, McLaughlin inherited a UW team that had finished last in the Pac-10. After just one rebuilding year, he launched the Huskies into elite status with eight straight NCAA tournament appearances, and counting.

“Flat out, it starts with Jim McLaughlin,” says senior setter Jenna Hagglund, when asked what makes the Huskies a powerhouse. “He is the best coach in the country. The whole atmosphere about Washington volleyball, it’s special.”

The UW makes its mark on the practice court, where competition is often fiercer than during the regular season. That’s a McLaughlin trait, and it’s fostered an environment where players go the extra step. He says they are learning how to learn.

“Most people want to take the easy road, but there is nothing easy about becoming great,” says McLaughlin, who helped coach Team USA—and three former Huskies—to a silver medal in June at a prestigious tournament in Switzerland.

“The thing I admire most about this program is the commitment of the women. I’m telling you, it’s remarkable.”

Washington returns three seniors—Hagglund, Kindra Carlson and Becky Perry—from a team that went 24-6 last year and reached the second round of the NCAA tournament.