Sunny Boy greets visitors in the lobby of the Alumni House.

One of the welcome sights of football season will be watching King Redoubt, the UW football team’s Alaskan Malamute mascot, prancing and howling along the Husky Stadium sidelines.

But cute, furry Husky dogs haven’t always held the mascot job. For three years (1920-23), the UW’s mascot wasn’t furry, didn’t prance or howl. Heck, it wasn’t even alive. It was Sunny Boy, a 3 1/2-foot, gold-painted wooden statue. And despite being a 70-pound still object, he sure got around.

A sculptured replica of the happy-faced character Sunny, who appeared in the University’s lusty humor magazine Sun Dodger, in 1919, Sunny Boy was whittled into being by Ballard artist Maurice S. Holcomb to be a symbol of “Joe College,” dressed in a bow tie, holding books under one arm and a football under the other. Behind him are the four columns originally part of the first University building (located in downtown Seattle).

He represented the “ideal Washingtonian—happy, jovial, confident, powerful and above all, a good sport”—according to one 1920s press report.

But let’s get real. As a mascot, Sunny was a dud. The public never warmed up to the hunk of wood, and the name Sun Dodger fell out of favor as Northwesterners no longer wanted a name that maligned their climate. So in 1923, the name Sun Dodgers was junked in favor of Huskies. And Sunny Boy was dispatched to a fraternity trophy case.

Then, for some reason, he became popular. His most popular episode appears to be somewhat disputed. According to one story, he was discovered in the basement of a Laurelhurst rooming house before the 1929 UW-Chicago game and was taken by Husky rooters to Chicago, but he never returned. Some said he was simply abandoned in the Heartland.

Another story says fraternity pranksters boxed and shipped the little guy to the Midwest. In any event, he somehow ended up in South Bend, Ind., in the hands of Mr. and Mrs. W.G. Ponader. Not sure what to do with their new visitor, they put him in the back yard, where he spent the next 23 years. It wasn’t always a peaceful coexistence. “Believe me, there were several times when he almost landed in our fireplace,” Mrs. Ponader told the press. 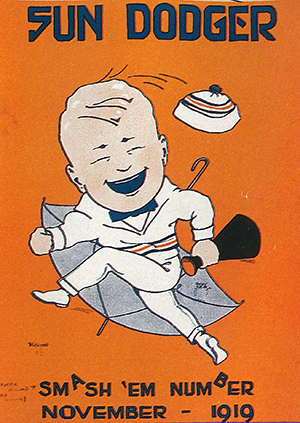 A cover from an issue of the campus humor magazine Sun Dodger has an early rendition of the original Sunny Boy.

When R. Bronsdon “Curly” Harris, then executive director of the UW Alumni Association, mentioned the legend of Sunny Boy to a sportswriter before the 1948 UW-Notre Dame game, the story received a lot of play in the papers. Turns out a curious gardener found Sunny in the Ponader yard, did a little research and discovered Sunny’s rich link to UW history. In ceremonies prior to the Notre Dame game, Sunny was returned to Harris, UW President Raymond B. Allen and Athletic Director Harvey Cassill. The UW was thrilled to get him back and the farmer was thrilled to get rid of him. “I used him for a scarecrow for awhile,” Ponader told Harris.

The former mascot came back to his new home in the alumni association offices, where he enjoyed a quiet life for the next four and a half decades. Then, in June 1994, he was stolen by fraternity ne’er-do-wells. An anonymous tip led authorities to find Sunny in Issaquah a few days later, but not before the school received calls demanding a ransom, calls blaming the theft on Washington State University, and one call reporting the statue to be in Hawaii.

For the past three years, though, Sunny has been safe and sound, chained to a railing in the Alumni House, where he stands guard in the lobby. Some who enter the alumni offices never notice the smiling, gold, short little man in the bow tie who once was the victim of pranks and once served as the University’s mascot.