W. Thomas Porter, ’59, put his love of the Huskies in writing 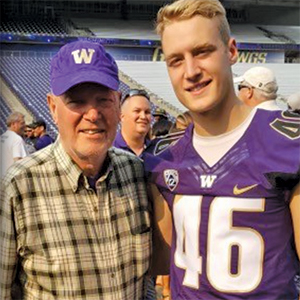 W. Thomas Porter, ’59, served in the army, earned his MBA from the Foster School of Business, taught at the UW, and loved Husky athletics with all his might. He led the UW’s $54 million Campaign for the Student Athlete, and he authored numerous books celebrating Husky athletics. He was even known to peddle books out of the trunk of his car at tailgates.

Porter, who died Jan. 27 at the age of 87, was working on a book on the 1958 men’s crew’s stunning victory in Moscow at the time of his death. Husky fans everywhere have his books on their bookshelves: “Go Huskies! Celebrating the Washington Football Tradition”; “A Football Band of Brothers: Forging the University of Washington First National Championship”; and “Husky Stadium: Great Games and Golden Moments.”

But Porter wasn’t only about sports. While teaching in the Foster School as a professor management control, he also served as the UW’s director of planning. Then, he led an effort to implement a planning and budgeting program in all schools and colleges. He later enjoyed a career in banking but continued to teach, and lectured at the Foster School when he was 73.