Ward Serrill, ’79, changes the game as a filmmaker 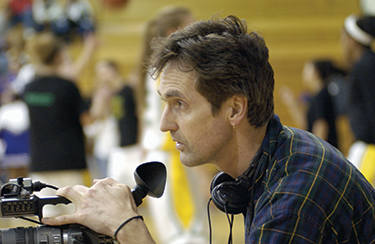 In 1979, Ward Serrill graduated from the UW with a degree in accounting. Today, his profession has nothing to do with crunching numbers or business suits. He says he doesn’t even do his own taxes. But he’s no quitter; not by a long shot. He is a man who has found his passion, not as an accountant, but as a storyteller. And his passion is paying off in the form of a documentary called The Heart of the Game, a film that chronicles seven years with the Roosevelt High School girls’ basketball team and its unconventional coach. Film Critic Roger Ebert called it “a triumph.”

“I knew that if people saw it they would love it, but you can’t predict that,” says Serrill of the glowing review. And Ebert’s is just one of many the film has received. It was picked up by Miramax and is now available on DVD.

After graduating from the UW, Serrill took a job with the accounting firm Ernst & Whinney, which indirectly gave him his first opportunity to get his creative juices flowing. “[Ernst & Whinney] had all these jobs up in Alaska, and none of the other accountants wanted to go,” Serrill remembers. “But I couldn’t get my hand in the air fast enough.” While working as a controller for a Native corporation, Serrill developed a cultural tourism program outside of Ketchikan and began to dabble in different forms of expression, which eventually led him to filmmaking. “I just went from accounting to art,” he says.

In 1998 he went to a dinner party that would change his life. It was there that he met Bill Resler, a UW senior lecturer in accounting who spent his evenings coaching girls’ basketball at Roosevelt High School. Serrill knew right away that he had found a character, a man he describes as “a real court jester.” So he began to film the Roosevelt Roughriders and Resler for a documentary. Six years and some 200 hours of footage later, The Heart of the Game was completed—containing a combination of comedy and plot twists that few would have found believable had the film been fiction.

Over the course of those six years, Serrill learned that success would not come easily, and not without a little luck. There were a number of obstacles to overcome, including a shortage of funds, a lack of a distributor for several years, and the personal anxiety Serrill felt about how he would turn the stories he had filmed into a movie. But he stayed motivated by a promise he had made to the players that they would someday be in a movie, and by the generous financial contributions of community members. “That was amazing,” says Serrill of the donations. “I couldn’t turn my back on that.”

Serrill describes the experience as fun—that is, if you consider scaling Mount Rainier fun. “In the end, you’re really glad you did it, but it’s such hard work and so full of fear and obstacles. I’ve primarily had fun because that’s what Bill Resler teaches most,” he says.

As for what’s next for Ward Serrill, there is currently talk of a Hollywood version of The Heart of the Game, with which he says he would be involved to some extent because he owns the rights to the story. As for the long term, Serrill says his days of career-hopping are behind him. “My mission is to tell stories that heal and inspire,” he says. “I am a storyteller. So for the rest of my life I’m going to figure out a way to tell stories.”