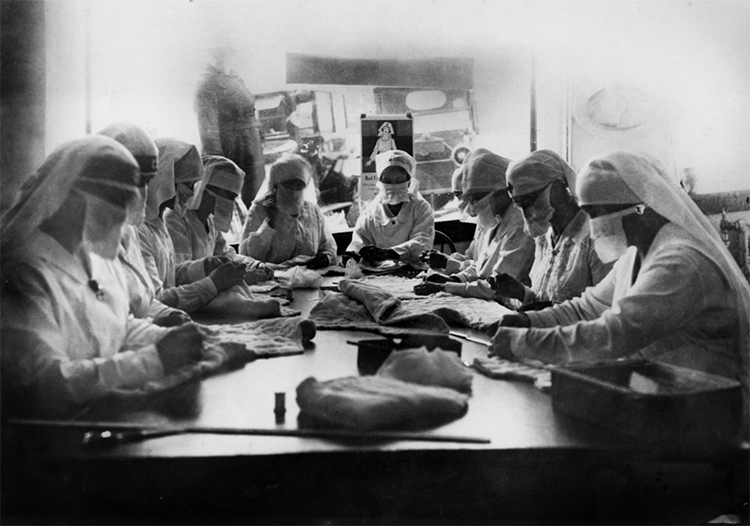 Our ways of responding to an outbreak are much the same today as in 1918. (National Archives photo)

We’d all like to forget the challenges of a pandemic-filled 2020—the empty store shelves, suddenly working from home or losing our jobs, the political unrest, not seeing our friends or family, the school closures, the smoke-filled weeks and the boarded-up buildings. But we shouldn’t.

History and information experts say we might learn from 1918, when another devastating pandemic swept the world. The world forgot. The Spanish flu ultimately infected 500 million people and killed 50 million. There are haunting similarities between then and now—a national lack of preparedness, confusing propaganda, the disproportionate effect on people of color, and how different communities responded to the outbreak at different times. Then, as now, groups of citizens disagreed with social distancing and masking, but those were and still are the best tools for slowing the spread of disease.

And at the end of it all, in spite of the lives affected and lives lost, the country just wanted to move on. So much of that 1918 pandemic has been forgotten, notes iSchool professor Joseph Janes, that we don’t know what people were doing or feeling from day to day. “I think now we all understand that people in 1920 just didn’t want to think about it anymore,” he says.

There are no monuments, and very few memoirs or novels, according to Nancy Bristow, who discussed the two pandemics in a UW History Department lecture this past summer. Bristow, who teaches at the University of Puget Sound, is one of the leading experts on the social and cultural effects of the Spanish flu, having researched primary sources like letters and journals for her book, “American Pandemic: The Lost Worlds of the 1918 Influenza Epidemic.”

Though it’s more than a century later, our ways of responding to an outbreak and the tools at our disposal are much the same as then, she says. The strategies to stem the spread in 1918—education, hygiene, social distancing, quarantining, closures and masking—are unchanged. The communities that took action early diminished their death tolls. Other communities fared worse.

Cities like Spokane and San Francisco struggled to contain the flu because of disagreements between health officials and local leaders. Seattle fared better thanks to a well-coordinated response, says Bristow. On Oct. 4, 1918, the Naval Training Station on the UW campus reported that one cadet had died and more than 700 people were ill. By the next day, the city health commissioner enacted the first round of restrictions, and just two days later, he shut down all public gatherings, church services and public amusements. People were urged to stay home. By November, masks were required.

History looks at that time as the end of World War I and the victorious role the U.S. played. But the pandemic essentially has been forgotten.

Janes has the same concern with this year. “My contention is when this is over, we’re not going to talk about this,” he says. Our instincts will be to get past this bizarre, difficult time in an effort to return to normal, he suggests. Also, today, far fewer people keep diaries or write letters detailing their experiences. Texts and emails will not likely endure, he says.

So now, when our memories of the past several months are fresh, we should make the effort to hang on to them, he says. “The future is going to want to know how we felt,” says Janes. “Just like we want to know how they felt in 1918.”