When lightning strikes, UW professor knows about it 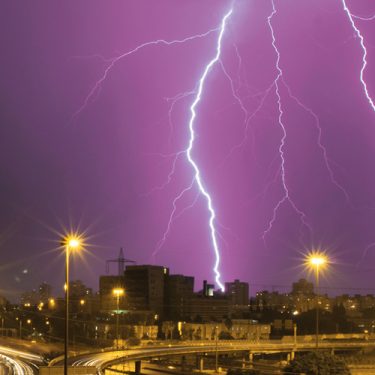 Call him the lightning listener. Robert Holzworth, UW professor of earth and space sciences, directs the World Wide Lightning Location Network (WWLLN), a series of stations around the globe that monitor pulses of radio waves generated by lightning strokes. The network was begun in 2002 and should have close to 60 operating stations by the end of this year.

Together, the data from the stations produce an ever-shifting, real-time map (www.wwlln.net) of lightning activity all over the world. This information will help scientists monitor and predict the behavior of hurricanes, locate volcanic ash clouds, and detect storms that may be hazardous to aircraft in flight.

And it can lead to more unexpected flashes of insight, as well. Recently, an orbiting telescope detected 17 gamma-ray pulses coming from Earth. The pulses matched up with lightning recorded by the WWLLN. Moreover, in two of the storms, the telescope picked up the signature of positrons, the antimatter equivalent of electrons. So not only does lightning produce gamma rays—a powerful form of radiation—but it can apparently even destroy matter.