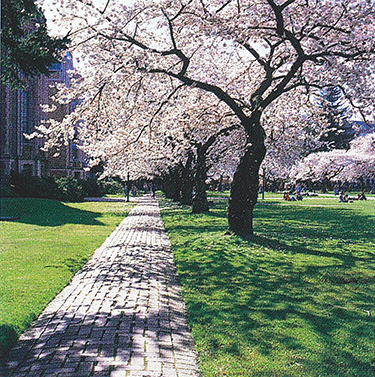 It was the Sixties and angry UW students demanded to have their way. Leaders staged a massive rally in the Liberal Arts Quadrangle, drawing more than 3,000 people, and in less than two days were able to gather 10,000 signatures on a petition.

Late one night, as a symbol of their protest, some students even bricked in the front entrance to the UW Administration Building, now called Gerberding Hall.

But the cause of the unrest was not the draft, bombing North Vietnam or a black studies department, but an administrative decision to tear up the Quad’s brick pathways and replace them with blacktop.

It was April 1962, just a few days before the Seattle World’s Fair would open, when Jon Schneidler and fellow political science majors were taking a break on the Quad. “We saw these workmen pulling up the bricks and we asked them what was going on,” he recalls. They told them they were doing utility work and then were going to replace the bricks with asphalt.

“Well, it was April, the sun was shining, we were full of testosterone,” he recalls. “We needed something to fight about.”

The UW was planning several phases of utility work in the Quad area. Rather than lay down brick sidewalks, only to have them pulled up again in a few months, campus officials decided to use asphalt instead. “The reason was cost,” recalls Fred Mann, then the University architect. “There is quite a difference in price. Laying brick is much more complicated. You’ve got to lay it down so that someone won’t trip over it.”

To stop the “blackening” of the Quad, Schneidler, Howard McCurdy and Bob Hale organized a student movement, drawing on the resources of the Daily, the ASUW and the faculty. “We made up a petition and had 10,000 signatures in 36 hours. The faculty was of tremendous support; they spread it along in every classroom,” Schneidler says.

Angry letters flooded the pages of the Daily. “Well, ugliness wins again,” lamented one writer. “Progress is certainly wonderful. I wonder when we will get a floating bridge across Frosh Pond?” asked another. Board of Control Member Norm Dicks, ’63, ’68, now a member of the U.S. House of Representatives, co-sponsored a resolution demanding brick pathways.

On April 18 a protest rally was held as workers tried to remove some of the bricks. “We had an enormous crowd, at least 3,000 people,” Schneidler says.

Suddenly President Charles Odegaard walked up to address the throng. While he applauded the students’ concern for their campus, he said the cost of laying down brick and ripping it out again was just too much. Someday, after all the work was done, the asphalt would be taken out and the bricks would come back, he promised.

“Charles made a tremendous speech and we thought the cause was through,” says Schneidler, “but he couldn’t convince the crowd. When we asked them if they wanted us to back down, they shouted no.”

That night, angry students erected a four-foot wall of brick at the entrance to the Administration Building, and spelled out a message—”We Want Brick!”—with some remaining pieces.

No one was ever charged with obstructing the entrance, but UW officials were taking the heat in the press and on TV. “It was the lead story on the local TV stations night after night, and that just killed them,” Schneidler recalled. There was some talk of a sit-in, but before it could take place, the University told the contractor to stop the removal.

When the protest leaders gathered up statements of support from the Seattle Fine Arts Commission, powerful state legislators, and even the UW’s own consultant on landscape architecture, Odegaard and his staff gave in.

“We won,” exclaimed the Daily. Odegaard and his staff swallowed hard and found $36,000 to redo the brick paths. “The University was clumsy, but it is to their credit that they dropped it,” Schneidler says. “For the students, it was glorious.”

The plans were to pave all the walkways with brick, including diagonal paths that were covered with crushed stone. But during the utility work, only the main north-south and east-west paths were rebricked. Crushed stone remained on the diagonal paths until last fall, when after 36 years, the promise of brick pathways was finally met.