When The Daily turned the world upside-down 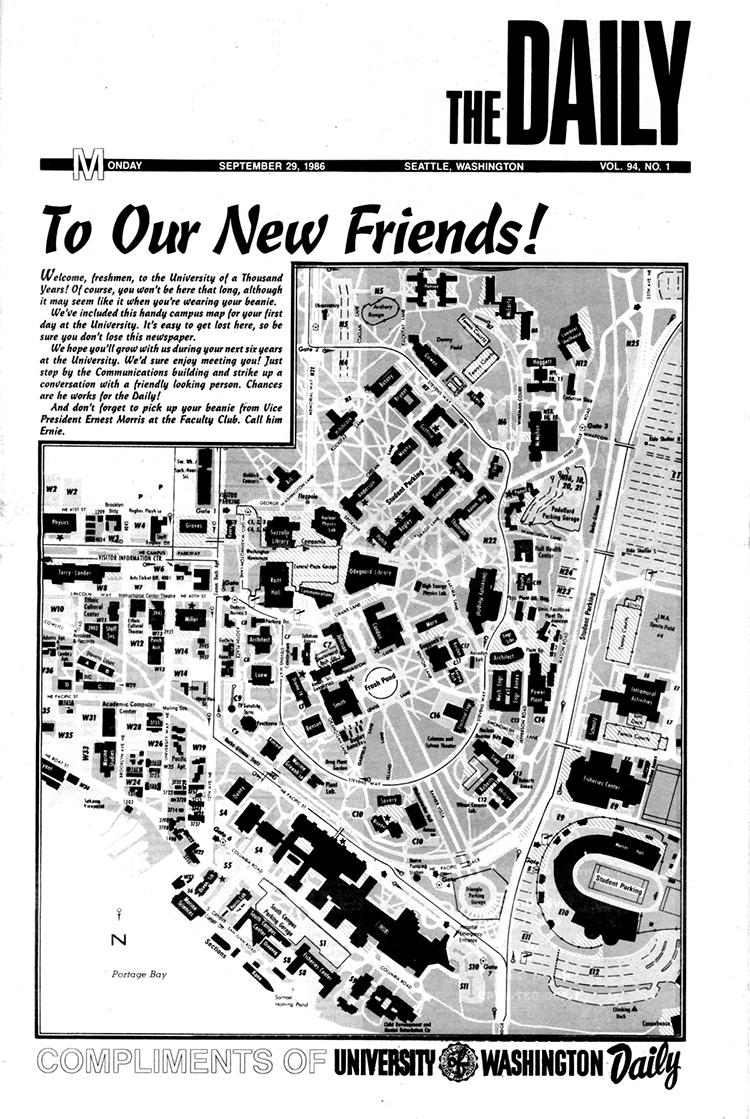 On Sept. 29, 1986, thousands of new students picked up their copies of the University of Washington’s student newspaper, The Daily, unfolded the front page and discovered a map of campus with the headline “To Our New Friends!” The map seemed to be a helpful aid for campus newcomers. But those who followed it soon found themselves hopelessly lost—and miles from their intended destinations.

“We were just sitting around the office one day, trying to think of some prank to play on the freshmen,” says Jim Caple, ’97, then a reporter for The Daily.

Caple’s idea was perfect in its simplicity and inventiveness: reprint the UW campus map with names of most buildings switched around. The University Hospital became the HUB, Odegaard Undergraduate Library became Suzzallo, student parking was relocated to the middle of Husky Stadium and Drumheller Fountain was (appropriately) renamed “Frosh Pond.”

While Caple is credited with the initial idea, Editor Bruce Taylor, ’88, and Erik P. Smith, ’86, were in charge of executing the plan. They decided to make the map somewhat realistic. “We switched the buildings in the Quad because no one can keep them straight anyway,” Taylor explains. “We wanted to keep the dorms the same because the students knew those.”

Caple adds, “We made a point of making sure any building the freshmen would definitely know was kept the same.”

The morning the issue was distributed, the pouring rain merely added to the confusion of lost freshmen, international students, campus visitors and even some clueless upperclassmen.

While administrators did receive a few angry phone calls, most laughed the joke off or remained mute in their embarrassment. Many remember The Daily as having a reputation for pranks, sarcasm and less-than-straightlaced news coverage at that time.

“I’ve seen The Daily do things that were worse, that were really problematic, but this wasn’t one of them,” says UW Director of News and Information Bob Roseth. “I think the students figured it out really quick; we’ve got a pretty bright group here, and it was well within the tradition of The Daily.”

“Basically it was a cruel joke on the freshmen, who deserved to be hazed,” Taylor laughs. “Erik said it better when he was on TV, something to the effect of ‘We want to return to the days when freshmen were beaten with sticks.’”

Looking back, Caple and Taylor decry the limited sense of humor of current Daily staffers, and reflect on how they’ve moved on since their UW years. “The Daily’s a pretty straight newspaper now, which I think is to its detriment,” Taylor says.

Caple’s and Taylor’s light-hearted attitude has smoothed the way for their lucrative career paths. Now a senior writer at ESPN.com, Caple writes a weekly baseball column and has published his first book, “The Devil Wears Pinstripes.” Taylor is a partner with the sports group Fantasy Index Magazines, which was born in the offices of The Daily.