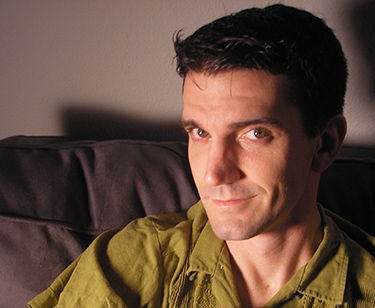 When Barry Witham, a drama professor at the UW, wanted to tell his son Drake ‘no’ in the vaguest possible way, he’d rely on that old fatherly standby, ‘We’ll see.’ Now Drake, ’96, is getting back at him … on national television.

“‘We’ll see’ means ‘No, not now, not ever. Gimme another beer,’ ” Witham says, to thunderous laughs from the studio audience of “The Late Late Show with Craig Ferguson.” “So I tried using this line on him …. ‘Son, you think you might ever get a real job?’ ‘We’ll see.’ ”

All joking aside, Witham has a real job—he’s a full-time touring comedian, based in Los Angeles, with a long resume of club and television appearances and a full-length DVD entitled—what else?—“We’ll See.”

But the road to success has been a long, bumpy and filled with detours.

Witham graduated from the UW in 1996, majoring in political science and communication with a focus on journalism. He spent about five years working as a reporter for the Dallas Morning News before turning to comedy—something he says he’d always wanted to do. When he moved to L.A. in 2002 to pursue his dream, however, he discovered a lot of other people had the same idea. Witham spent the beginning of his comedy career performing anywhere he could, including a laundromat that held open mic nights every month—an experience he hopes he never has to repeat. Most of the audience was more interested in separating their whites and darks, he says, than in watching his act.

Witham also took his lumps as a temp worker, a period he now draws upon in his standup act. While doing customer service for a beauty products company, he says, he got a letter from a 7-year-old girl asking if they tested their shampoo on animals. “I’m thinking, ‘That’s a great letter, you know. She’s 7 years old. She’s active.’ But I’m a temp, and I don’t care. So I wrote back, ‘No, no we don’t test on animals. But what a good idea!’”

Witham’s style is observational, deadpan and biting. Onstage, as in real life, he is wry and low-key, qualities that play particularly well in the Northwest, he says. Seattle crowds are some of his favorites, because they like comedians who simply talk to them. In 2003, he won the Seattle Comedy Competition.

He’s kept his UW connections strong, too. Witham is one of more than 5,000 Husky Career Network contacts—professionals who have volunteered to give their fellow Huskies career advice.

(To get in touch with him, or with a contact in virtually any other field, visit UWalum.com).

For all the indignities that come with being an aspiring stand-up, Witham says he’d encourage anyone who dreams of doing comedy professionally to follow that dream.

“Just push yourself and you can do it.”