With father undergoing cancer treatment, daughter takes up the fight 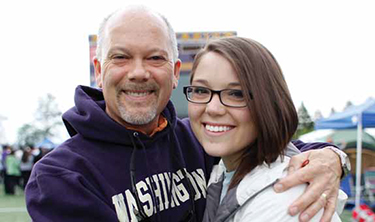 Paul Dann, ’83, greets daughter Claire before the start of the UW Relay for Life.

When cancer strikes a family member, people react differently. Some people feel powerless. Others are immobilized by fear. Not Claire Dann. Never one to take a passive approach to difficult news, the UW junior kicked into high gear this spring when her father experienced a recurrence of a rare form of kidney cancer. While Paul Dann, ’83, of Richland, received treatment at the UW Medical Center, Claire got busy and organized a Relay for Life team she named “Paul’s Pals.”

During the weekend of May 21-22, 18 members of her team (as well as more than 3,000 other participants) walked around the Husky Stadium track for 18 hours at the UW Relay event. “Everyone really came together for this. Family members came to support us even if they didn’t walk. It’s like a tangible support system for my dad,” Claire says.

With Claire as the driving force, her team thus far has raised $5,300, putting Paul’s Pals in third place among teams raising the most money. As Columns went to press, Claire was in second place for most money raised by an individual. This is no small feat considering that there were 213 teams that raised more than $240,000 as of the event. She and her team of family and friends have until August to complete their fundraising.

Claire sees a direct line from the money raised at events like this to benefiting people living with cancer.

“[The money we raise for] cancer research really matters because the drug my dad is on was not even available four years ago,” she says. “My dad is one of the 5 percent of kidney-cancer patients with a rare type, yet his hope and optimism does not falter. Participating in the Relay for Life is the least I can do to support him.”

As for her father, he couldn’t be more proud. “Being away from home and having a parent with cancer adds stress to a college student’s already stressful circumstances,” Paul says. “I am so proud of Claire and how she has chosen a positive outlet to channel her anxiety in a way that will help others. Of course, I think she is an amazing girl because I’m her dad. Her Relay for Life supporters think she is pretty amazing, too.”

Claire and her father aren’t the only family members who fancy the purple and gold. Her twin brothers, Geoff and Greg, graduated in 2010 with bachelor’s degrees in biochemistry. Claire is studying honors art history and plans to continue her education so that she can become a professor.

Like Claire’s team, the entire UW Relay for Life is student-managed. Almeera Anwar, a junior studying journalism and anthropology, and Loren Carlson, a junior studying the comparative history of ideas and pre-nursing, co-chaired the event along with a committee of 35 coordinating volunteers.