Don Coryell is on the Brink of Making the Pro Football Hall of Fame. Again. 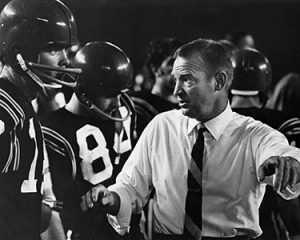 But Coryell’s long wait might be over soon. For the sixth time, the Seattle native who coached the NFL’s St. Louis Cardinals and San Diego Chargers to great success with his renowned “Air Coryell” passing game, is a finalist in the Coach/Contributor category to make it into the Pro Football Hall of Fame. Final selections will be made in January 2023. Coryell, who died in 2010 at the age of 85, also was a finalist in 2010, 2015, 2016, 2017, 2019 and 2020.

Coryell is credited with pioneering the use of:

The first coach to win 100 games in college and the pros, Coryell was one of the game’s most successful mentors. His coaching tree includes two Super Bowl-winning coaches (Joe Gibbs and John Madden) and he mentored a number of quarterbacks who were incredibly successful. He led the NFL in passing seven times.

Coryell was a rare coach who was greatly admired by his players. “A lot of coaches don’t even know who you are,” recalls former All-Pro quarterback Dan Fouts, who played for Coryell in San Diego.