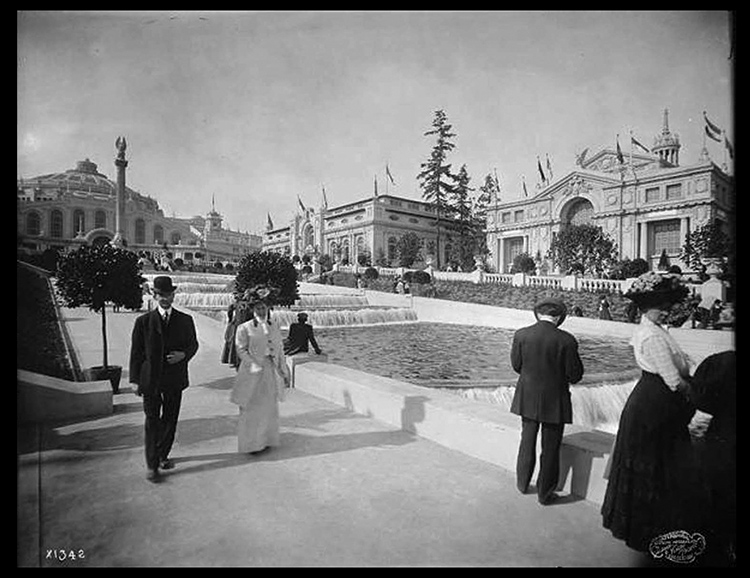 The mall just north of Drumheller Fountain as it appeared during the Alaska-Yukon-Pacific Exposition in 1909.

Nicolette Bromberg is not one to be easily impressed by pretty pictures. As a visual materials curator for Special Collections at the UW Libraries, she handles stunning and historically significant images on a daily basis. But a few years ago, she came across something that widened even her discerning eyes.

It was a collection of photographs by Frank Nowell, taken on and around the UW campus in 1909 to document the Alaska-Yukon-Pacific Exposition. Bromberg had been asked to process the collection in preparation for the AYPE 100th anniversary in June 2009.

“I saw that the photos were aesthetically excellent and also very interesting,” she says. “Since then I’ve been somewhat consumed with the AYPE photographs.”

She’s not the only one. While Bromberg was organizing the collection, photography lecturer John Stamets was immersing himself in Nowell’s work. In it, he saw a potentially invaluable teaching tool. The two have since discovered their shared passion for Nowell, and have joined forces to produce a book on the great photographer’s work—just in time for the centennial celebrations.

A White City in the West, a coffee-table volume with text by Bromberg and photos by Nowell, Stamets and his students, will be published by the University of Washington Press next fall.

The Alaska-Yukon-Pacific Exposition was a four-month celebration held on the young University of Washington campus, showcasing the growth and progress of the Pacific Northwest and Alaska. Event organizers hoped to promote commercial trade with Pacific Rim countries and encourage visitors to fall in love with, and relocate to, the Seattle area. It exceeded those expectations, catapulting Washington out of the shadows and into the international spotlight. First-day attendance on June 1, 1909, was close to 80,000, and when all was said and done approximately 3 million visitors from all over the world had come to experience the event.

Before serving as the exposition’s official photographer, Nowell had been best-known for chronicling Alaska after the gold rush of 1900, and for documenting the lives and customs of Eskimos. Nowell’s AYPE photographs—of educational exhibits, exotic attractions, buildings, formal gardens, fountains and people—depict more than the exposition. They offer an intriguing glimpse of the UW in its infancy, and suggest the significant role the school played in introducing Seattle to the world.