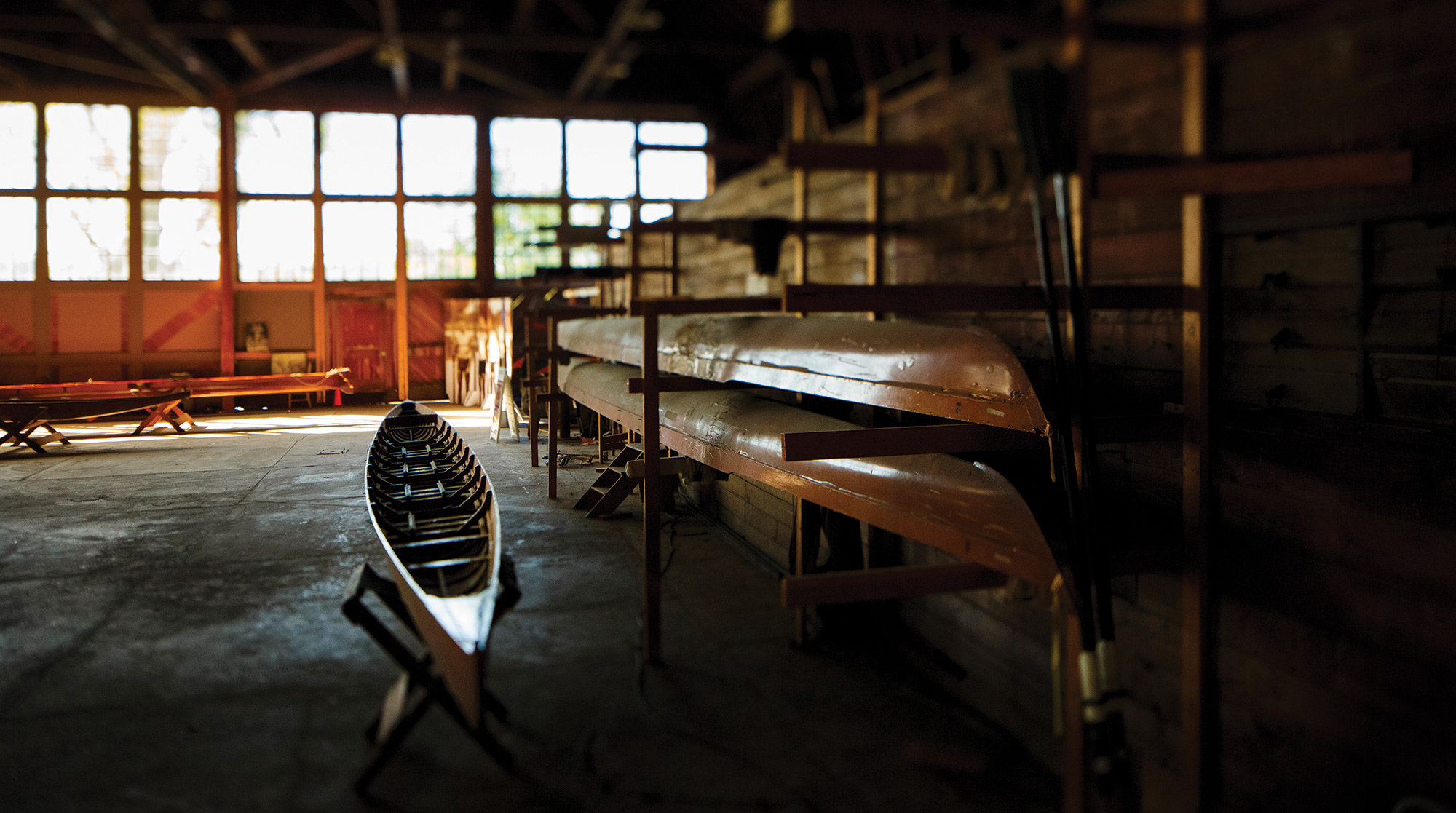 The 101-year-old ASUW Shell House was home to George Pocock’s brilliance and the fierce determination of the “Boys in the Boat.”

In 1936, a team of nine boys from the University of Washington arrived in Hitler’s Germany, ready to compete in the Summer Olympics. As the U.S. Olympic team’s eight-oar crew, they stunned the world by pulling off a victory that never should have happened. Those rowers were sophomores and juniors, pitted against seasoned, government-sponsored teams from around the world.

Not surprisingly, they were assigned to lane six, the outside lane—a lane so exposed to the wind that it was like adding a two-length handicap behind the boat in lane one, the best lane. That lane, of course, was assigned to the Germans. To make matters worse, the boys from Seattle were so preoccupied with keeping their shell straight in the face of the wind that they missed the drop of the starter’s flag and got off the line a stroke and a half late. Don Hume, ’37, their stroke oar, the man who set the pace, was ill with what was probably walking pneumonia. Shortly into the 2,000-meter race, he nearly passed out, and became unaware of his surroundings.

It wasn’t until the last 500 meters or so that Hume snapped out of it and began to respond to the call of coxswain Bobby Moch, ’36, to pick up the pace. It should have been too late. But their skill as a team, their wicked-fast racing shell, and the bond between the boys would not allow any of them to let the others down. They pulled off an impossible win in front of Adolf Hitler. By six-tenths of a second. 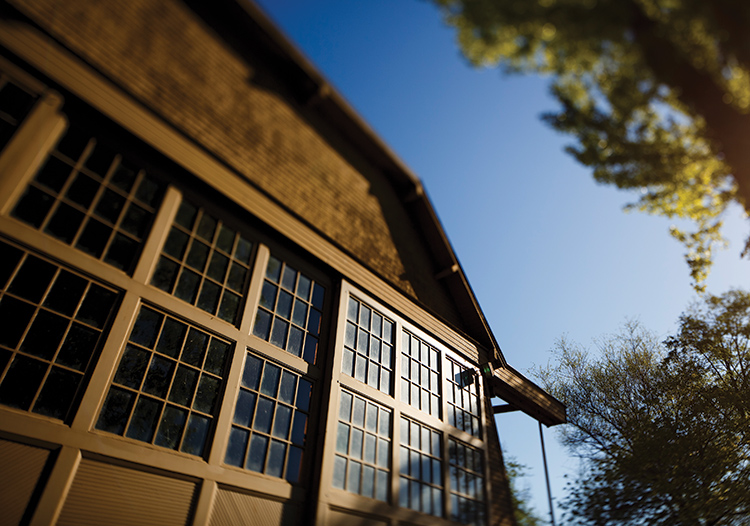 The ASUW Shell House owes its massive size and interesting shape to the fact that it was originally designed to potentially house seaplanes from World War I.

Where did this amazing team come from? Not from any of the prestigious rowing programs of colleges back east. They trained right here in what was then the backwater town of Seattle, in an old building that housed seaplanes at the end of World War I, known then as the ASUW Shell House. Located along the shore of the Montlake Cut, this building, which was erected in 1918, not only served as the training center for decades of Husky oarsmen, but also housed the workshop of the legendary George Pocock. The racing shells he built by hand were unsurpassed in speed and structure; no wonder they were used for decades by colleges across the country as well as by Olympic competitors.

Inside this huge, wooden shell house, the boys were privy to the wise counsel of Pocock, a man who understood both the dynamics of rowing and the dynamics of the human soul.

So, what are my earliest memories of the old ASUW Shell House? You might think they were from my childhood but I was only 3 years old when the 1936 crew gathered for its 10-year reunion row in 1946. Just a few years later, the new Conibear Shellhouse was up and running and the old ASUW Shell House was relegated to storage and miscellany. I actually never entered the shell house until 2012, after my dad, Joe Rantz, ’39, was gone. That was after “The Boys in the Boat” was written, and after I had done so much research for Daniel James Brown’s book that I began to understand how Dad’s history, my history, and a portion of my heart were tied into the history of that shell house.

Still, it was serendipity that I ever got to go into that old building at all. After a movie studio optioned the book for a motion picture, Brown and I were taking a potential screenwriter on a tour of the campus, looking at some of Dad’s memorabilia and the Husky Clipper in the Conibear Shellhouse, as well as scouting locations on campus that were mentioned in the book. We told the screenwriter we could show him the outside of the old shell house, but it was locked so we couldn’t get in. (You may wonder why we didn’t have access, but this was in 2012 and the book had neither been completed nor released yet. Nobody knew who we were.) But, as fate would have it, the screenwriter found an open door and in we went. 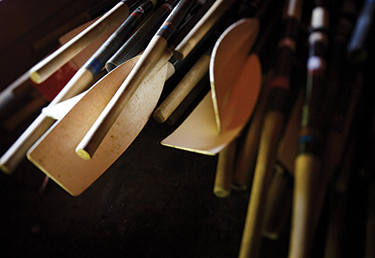 Taking time to dry off, a collection of oars currently takes a rest in the 101-year-old ASUW Shell House.

Being inside was almost mystical. Even though the interior was in a state of disarray, filled with a motley assortment of canoes, paddle boards, rowboats, old Pocock racing shells and such, the building still had an air of nobility. I can picture the coaches’ offices off to the side, the racks of gleaming new racing shells, the groups of tall, young men moving around those racks. It was enough to bring tears to my eyes and raise the hairs on the back of my neck. The history was still there, still alive.

I have been asked what my vision would be as the UW explores opportunities for the shell house. My main goal, I would say, would be preserving its history. The shell house and the land it sits on have many fascinating stories to tell. I’d like visitors to feel veneration for the great age of the building itself and be surrounded with displays that explain the stages of history this piece of land has passed through, a “walk through history” as it were. Mobile stations could represent the land as the Native Americans used it, as the military seaplane hangar first built upon that land, and as the ASUW Shell House, which became that hangar’s subsequent use for decades. I imagine virtual-reality “hosts” explaining the history of each station. Of course, I would want to see a display dedicated to the 1936 crew, with recreations of the stirring races that took place year.

Another thing I could visualize is a life-sized diorama under Pocock’s workshop. It would feature an actual Pocock eight with models of rowers in various stages of stepping into the shell—some sitting, some still on the dock, a mural of Lake Washington in the background, along with the sounds of water lapping and of a shell bumping against the dock. This would give the observer a personal experience of the actual size of a racing eight—what the inside looks like and how the rowers sit. 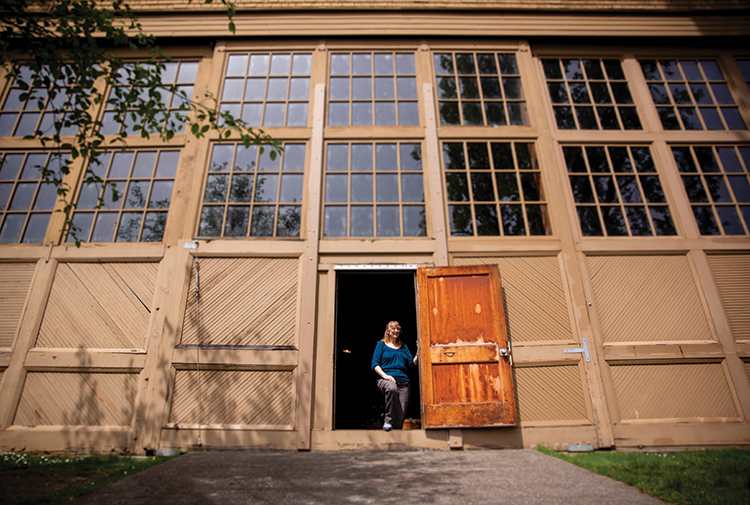 The book “The Boys in the Boat” opened the door to the rest of the world about the story of the 1936 Husky crew that won gold at the Berlin Olympics. Judy Rantz Willman, ’65, says the ASUW Shell House would be a perfect place to host a museum honoring those rowers.

And, of course, there’s Pocock’s workshop—this is where I feel the strongest draw. Even now, how can you step into that area—almost a century later—and not imagine smelling a whiff of cedar shavings? Or the suggestion of the sounds of long-gone hand tools working the wood? Dad was drawn to Pocock’s workshop. When his family abandoned him as a teenager in Sequim at the beginning of the Great Depression, Dad often worked with a neighbor to “earn” meals. One of the skills the neighbor taught him was how to work with cedar that had been left behind by loggers. Dad loved creating useful things out of throw-away wood. He loved the sound of the cedar as he split a section away from the main block of wood. He loved the smell of freshly split cedar and cedar shavings. Is it any wonder Dad was drawn to Pocock’s shop? The creativity and precision that went into the building of a delicate racing shell spoke to his soul.

Pocock firmly believed that when you put your best into something, you left a piece of your heart in it. Dad understood that love. His precision work with cedar later in life involved making roofing shakes and fencing rails, pickets, posts and poles, trellises, and bridges. And Dad taught us those skills. When my husband and I decided to build a house, Dad suggested that if I wanted to do something absolutely personal for the new house, he would teach me how to make shakes and help me put them on. This was no small task. Over three years, I split out 15 squares (each square covers 100 square feet) and in the end, Dad and I put them on the new house, each shake split by hand. The legacy of working in cedar lives on.

I want everyone who visits Pocock’s workshop to walk away with a better understanding of the labor and craftsmanship that went into building a racing shell, and to recognize Pocock’s dedication to the quality of his product. We have talked about infusing the workshop with the aroma of cedar shavings. We have talked about having a partially built shell on permanent display, having shell-building demonstrations by a master craftsman. I also would love to see Pocock’s many inspiring quotes displayed on the walls. I want people to experience the wisdom and philosophy of this amazing man.

I am thrilled that the old ASUW Shell House may have a new lease on life. I can see it as a gathering place, a teaching place, a place to celebrate and better understand how we are connected to the past. A place to honor those whose courage and dedication—whose grit and determination and honest endeavor—put the UW and Seattle on the world map. And for whatever part “The Boys in the Boat” had in this resurrection, I will remain extremely grateful that I had a role to play. 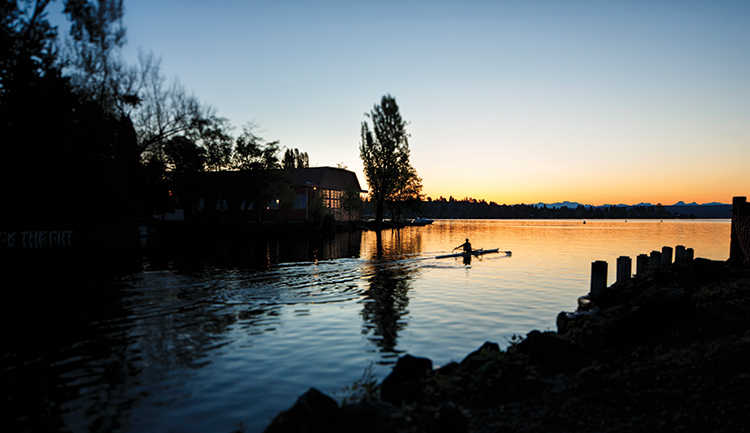 The sun shimmers off the windows of the ASUW Shell House at dawn on the Montlake Cut.

1918: Built to serve as naval seaplane hangar in World War I

1936: The UW team, aka “The Boys in the Boat,” wins the gold medal in the eight-man crew at the Summer Olympics in Berlin

1948: The four-man UW team wins gold at the Summer Olympics in London

1950: Becomes a site for renting canoes; becomes known as the Canoe House

1969: Women’s rowing returns after being canceled during World War I and uses the shell house for a few years until becoming varsity program and moving to Conibear

1975: Facility is named to the National Register of Historic Places, the first building on the UW campus to be so honored

‘Cathedral’ on the Cut filled with history and meaning

Judy Rantz Willman is the daughter of Joe Rantz, ’36, one of the Boys in the Boat who stunned the world by winning the Gold Medal at the 1936 Summer Olympics in Berlin.