Where to watch your fellow alumni on streaming services this winter 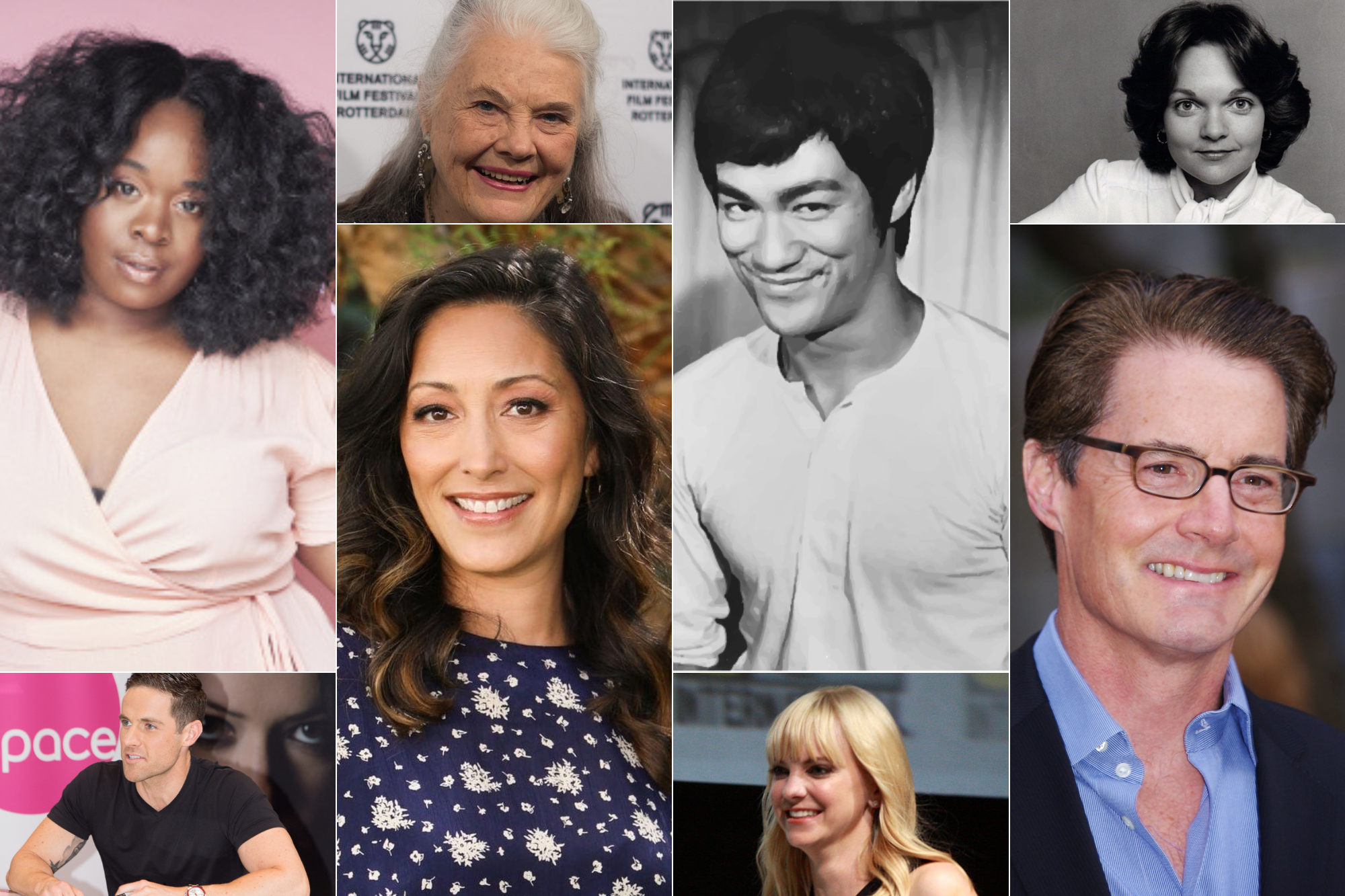 Winter brings shorter days and inclement weather, giving us more and more time inside. On the couch. Wondering what to watch. If you’re in between shows (or looking to add another one or two to the mix), find your fellow UW alumni on streaming services. These are a few of the Huskies we love to see on our small screens.

Dylan Bruce, ’02. Originally from Vancouver, British Columbia, Bruce studied economics and drama at the UW. His first major role was Martin Kail in “24” before he landed the part of Chris Hughes in 100 episodes of “As the World Turns” from 2007 through 2008. You can also see him in “Orphan Black” as Paul Dierden and in “Midnight, Texas” as Bobo Winthrop.

Christina Chang, ’96. Chang was born in Taiwan and moved to the United States at 17 to study at the University of Kansas before earning her MFA at the UW. She’s known for portraying Dr. Audrey Lim in “The Good Doctor,” but you can also catch her in “The West Wing,” “Nashville,” “Desperate Housewives,” “Rizzoli & Isles,” “CSI Miami, “Lucifer,” “Suits,” “Single Ladies,” “Live Free or Die Hard” and “24.”

Garret Dillahunt, ’87. Dillahunt was raised in Yakima and earned his degree in journalism from the UW before heading to New York City for an MFA in drama. Now, he stars as the recently released former incarceree Jack in “Sprung” on Freevee. He also played Jody in “The Mindy Project,” Burt in “Raising Hope” and Armsby in “12 Years a Slave.” 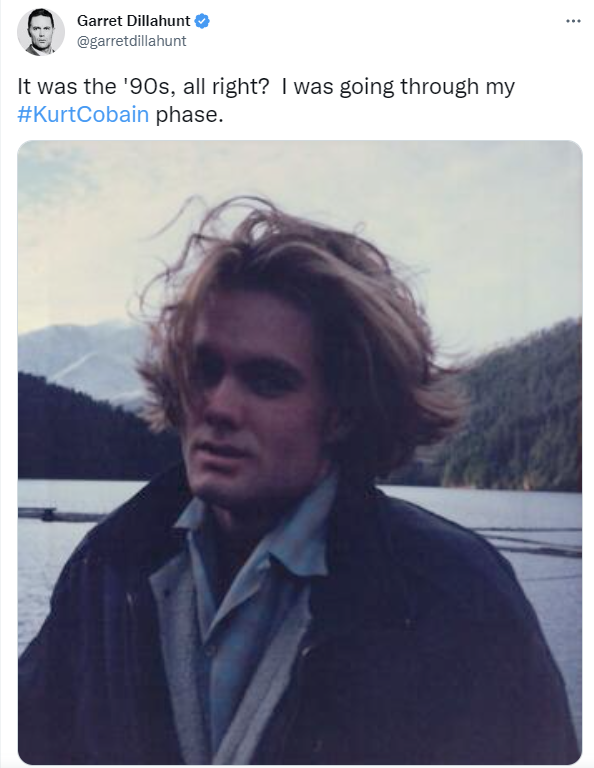 Dillahunt poses in the Pacific Northwest back in his Seattle days.

Linda Emond, ’86. Originally from Southern California, Emond also came to UW’s School of Drama for her MFA. Her first professional acting gig was with Empty Space Theatre, a Pike Place Market staple that ceased operation in 2006. You can catch Emond in Netflix’s buzzed-about new show “The Patient,” or see her recurring role in “Law & Order: Special Victims Unit” as Dr. Emily Stopher. She’s also in “The Gilded Age” and “Succession” on HBO, plus “Lodge 49” on Hulu. “Gossip Girl” fans might remember her as Headmistress Queller in the first two seasons.

Anna Faris, ’99. She’s known for her comedy in “Scary Movie,” “The House Bunny” and “Just Friends,” but Faris deserves praise for her starring role in “Mom,” which you can watch on Hulu. Faris, who earned her degree in English literature at the UW, hosts a podcast called “Anna Faris is Unqualified.” You might also remember her as Erica, the surrogate, in “Friends.”

Bria Samoné Henderson, ’18. Henderson, who is also a writer and spoken word poet, also came to the UW’s School of Drama for her MFA. She plays Dr. Jordan Allen on ABC’s “The Good Doctor” and Margaret Sloan in “Mrs. America” on Hulu.

Bruce Lee. Though he never finished his degree, Bruce Lee is an iconic alumnus who studied drama and philosophy at the UW. You can watch him as Kato in “The Green Hornet” on Tubi, or – if you’d prefer a feature length film – check out “The Big Boss” and “Enter the Dragon,” also on Tubi, and “Fist of Fury” on Pluto TV. A documentary about Lee called “Bruce Lee: A Warrior’s Journey” is available on Tubi.

Kyle MacLachlan, ’82. Can you believe this would-be star tried majoring in business and opera before heading to UW’s drama department? MacLachlan’s film and television career is too long to list, but a few highlights include his portrayals of FBI agent Dale Cooper in “Twin Peaks,” Trey MacDougal in “Sex and the City,” Orson Hodge in “Desperate Housewives,” The Mayor in “Portlandia” and The Captain in “How I Met Your Mother.” Open a bottle of his Walla Walla-made Pursued By Bear wine while you watch.

Joel McHale, ’95, ’00. McHale grew up in Seattle and met his wife, Sarah McHale, ‘92, at the UW. He went on to become one of the best-known comedians on TV, starring in “Community” (which you can catch on Netflix) and hosting a talk show called “The Soup.” Catch appearances from McHale in shows like “The Bear” on Hulu, “Santa Clarita Diet” on Netflix, “Stargirl” on HBO and more, including his appearance as one of the most beloved guest judges on RuPaul’s Drag Race. 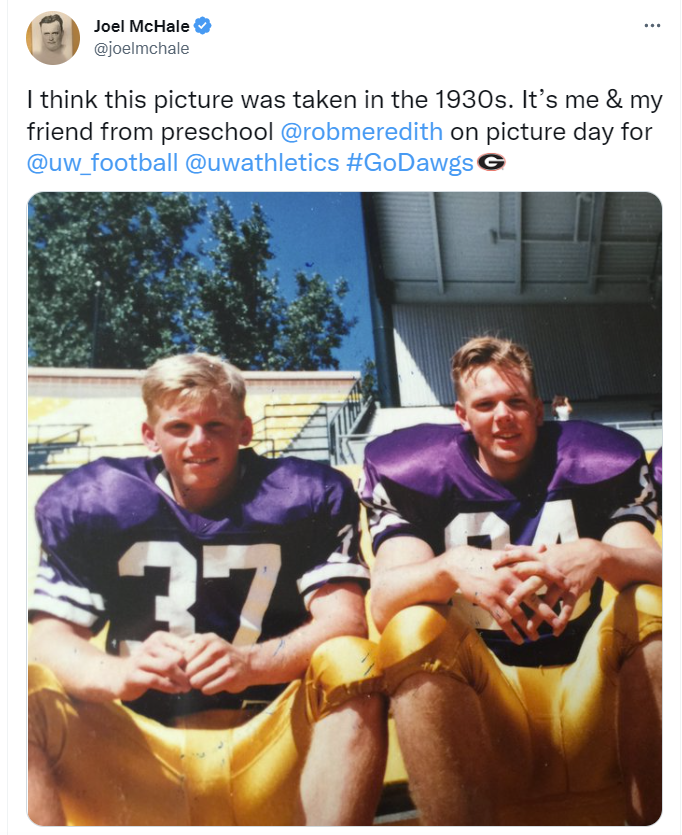 Joel McHale and Rob Meredith, ’95, pose in UW football uniforms in the 1990s.

Pamela Reed, ’75. Originally from Tacoma, Reed received her BFA from the School of Drama and is well known for her role as Arnold Schwarzenegger’s police partner in “Kindergarten Cop.” You can see her portray Gail Green in “Jericho,” Marlene Knope in “Parks & Recreation,” T.J. Cavanaugh in “Tanner ‘88” and Beverly Craine on “United States of Tara.” You can also hear her as Ruth Powers on “The Simpsons.”

Jean Smart, ’74. No guide to Huskies on television would be complete without the queen of HBO herself, Jean Smart. Her most recent starring role in “Hacks” earned her two Emmys, but we love every role she’s done, from “Watchmen” to “Designing Women” to “Samantha Who?” to “24” to her guest appearances on “Frasier” (which also earned her two Emmys). Long live the queen.

Lois Smith, ’51. From the stage to the screen, Smith is a force. Indie film fans will recognize her from “Lady Bird” and “The French Dispatch,” while lovers of the classics will remember her opposite James Dean in “East of Eden.” Her television credits are extensive, spanning from recent shows (like “True Blood” on HBO and “Ray Donovan” on Showtime) to her ‘70s appearances on “The Doctors.”

Julia Sweeney, ’82. Sweeney is a beloved former cast member of “Saturday Night Live,” and though she was born in Spokane, she considers Seattle her hometown (making her appearance on “Frasier” even more fitting). She recently appeared in the Hulu series “Shrill,” the Showtime series “Work in Progress,” and “American Gods” on Starz.

Rainn Wilson. Wilson (who recently changed his name to Rainnfall Heat Wave Extreme Winter Wilson to draw attention to climate change) only attended the UW for one year, but he considers it one very important year. Of course, you’ve seen him on “The Office,” but you can also catch him as Michael Sterns in “Utopia,” Detective Everett Backstrom in “Backstrom” and therapist Trevor Wills in “Mom” (which stars Anna Faris!). If you’re a fan of podcasts, his narration in “Radio Rental” is not to be missed.